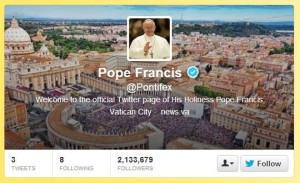 Pope Francis is planning to grant plenary indulgences to those who follow World Youth Day ceremonies in Brazil on Twitter or other social media during the week 23-28 July.

According to the Zenit news agency, the Pontiff issued a decree about indulgences and social media on 9 July.

The Sacred Apostolic Penitentiary, one of three tribunals of the Roman Curia that administers church business, issued a decree stating that “the faithful who are legitimately impeded [from attending events in person] can obtain the plenary indulgence if … they follow the same rites and pious exercises … by the new means of social communication.”

Catholics who are unable to travel to Rio de Janeiro next week can still, therefore, obtain a plenary indulgence associated with attendance at World Youth Day via the internet and social media.

Currently, the Pope has nearly 2.7 million Twitter followers. The decree is being seen as a part of an effort to use social media to connect with Catholics worldwide.

However, Archbishop Claudio Maria Celli, head of the Pontifical Council for Social Communications, has warned that “You don’t obtain an indulgence like you get a coffee from a vending machine.”

He told the Italian newspaper, Corriere della Sera, “It is not enough just to watch a Mass online or follow Pope Francis via live streaming on your iPad or by connecting to Pope2You.net. These are just devices.”

“What really counts is that the tweets the Pope sends from Brazil or the photos of the Catholic World Youth Day that go up on social media website produce authentic spiritual fruit in the hearts of everyone.”

To get an indulgence, the faithful must have already had their sins absolved by a priest.

Corriere della Sera asked Fr Paolo Padrini, an expert in digital communications, who has been dubbed the ‘iPriest’ about the online indulgence.

“Imagine your computer is a well-laden table where you can find tweets from Pope Francis, videos on YouTube, and Facebook postings from your friend in Brazil. That is the dinner that will nourish your spirit. Sharing, acting in unison, despite the obstacle of distance. But it will still be real participation and that is why you will obtain the indulgence. Above all because your click will have come from the heart,” Fr Padrini explained.