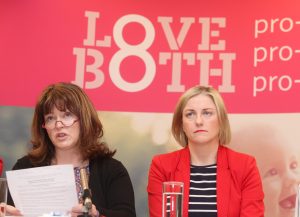 Two new opinion polls have been welcomed by the Pro Life Campaign as showing a drop in support for the Government’s proposal to introduce unrestricted access to abortion up to 12 weeks.

Yesterday, both the Sunday Independent and Sunday Times published the results of their latest polls on abortion and the Eighth Amendment.

Reacting to the findings, the Pro Life Campaign’s spokesperson, Dr Ruth Cullen said, “The vote on repeal is about whether we introduce abortion on demand or not. It is about nothing else.”

“It makes no sense talking about doing away with all constitutional protections for unborn babies through repeal and in the same breath arguing that meaningful protections for the right to life could somehow be provided for in legislation.”

The Sunday Independent/Kantar Millward Brown opinion poll shows 63% support in favour of a referendum to repeal the Eighth Amendment, with 24% opposed and 13% do not know or with no opinion.

On the proposal of unrestricted access to abortion up to 12 weeks, a third of voters or 33% said the proposal ‘went too far’ and a further 19% were undecided – which totals 52% against or unsure.

The findings also show one in five has yet to make up their mind on the question, meaning the referendum outcome is far from certain.

On the proposal of unrestricted access to abortion up to 12 weeks, the Behaviour & Attitudes poll for the Sunday Times shows 43% of voters in favour and 35% against. Almost one in four voters (22%) are undecided. Discounting the ‘don’t knows’, support for the proposal stands at 55% for versus 45% against.

Support for repeal of the Eighth Amendment is stronger among younger voters, while a narrow majority — 37% versus 35% — of over-55s favour keeping the constitutional ban on abortion.

Reacting to the findings of the two polls, Minister for Employment Affairs and Social Protection, Regina Doherty said she believed proposals to replace the Eighth Amendment would not pass as things stand.

Speaking on RTE’s ‘The Week in Politics’ programme, the Fine Gael Minister warned that the Government would have to step up its campaign if they were to convince voters.

Commenting on the two polls, Pro Life Campaign spokesperson, Dr Ruth Cullen said, “Obviously I welcome the shift in support in a pro-life direction indicated in the two latest polls. As more and more people come to realise what repeal of the Eighth Amendment would lead to in practice, I’m confident the polls will continue to move in the same direction.”

“No matter how it’s packaged or presented, repeal of the Eighth Amendment would strip unborn babies of all meaningful protections and lead to abortion on demand similar to countries like England where 1 in 5 pregnancies now end in abortion.”

“The point we have been making that there’s no such thing as limited abortion is starting to resonate with voters. This is not surprising as the evidence from other countries on this point is so strong.”

The referendum on the Eighth Amendment is expected to be held in May.