Home > News > Political parties must give a real voice to citizens

Political parties must give a real voice to citizens 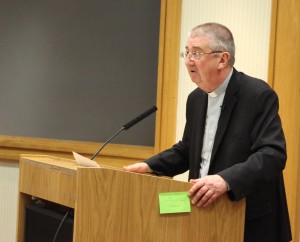 Archbishop Diarmuid Martin of Dublin has said he is concerned that poor policy on migration could give rise in Irish society for the first time to a political party focusing solely on immigration.

In a major address on the theme, ‘Beyond 2016 – What are our Aspiration for the Republic’, the Archbishop noted the emergence of a large proportion of voters in Ireland and Europe who support a range of independent candidates representing radically different views.

He said this phenomenon was “significant” and very often a protest vote.

“Protest can be a strong message and a strong cry for change. But you cannot run a nation on protest alone. You need policy and you need cohesive policy,” he warned at the annual Mac Gill Summer School in Co Donegal last Friday.

The Archbishop suggested that a democratic political system must not limit the role of citizens to voting in elections and referendums or being targeted in opinion polls.

Part of the role of the political party should be that of ensuring a real voice for citizens outside of elections and of involving citizens more in the decision-making of government and local administration.

“Where this does not happen, the result then turns out to be a political culture that becomes detached from the concerns and experiences of citizens and leaves the path open to deviations,” he said.

Referring to the American presidential election, Archbishop Martin warned that political parties in some countries have become dinosaurs which consume vast amounts of money and obstruct the real purpose of a party, which is that of mediating between policy formation and the citizen.

Elsewhere, he suggested that many of the problems that the Church faces are similar to those that the country will face as the country enters into the post-2016 Republic.

The challenge of cohesion was facing both the Church and State.

“Church and State both need new policies of cohesion,” he said and added, “Cohesion is not conformity or rigid ideology. Cohesion, as is often the case, can best be defined by looking at its opposite – and that opposite might be defined as ‘going round in all directions’.”

Referring to an address given in May by President Michael D. Higgins to The Wheel, the Archbishop said post 2016 the Church was “setting about the work of transition from a model of Church which was not the best version of ourselves to one which is grounded in a more authentic version of our being Christians”.

He also drew on the President’s reflections and those of Pope John Paul II on the absolutisation of economic life, warning “if the production and consumption of goods become the centre of social life and society’s only value, not subject to any other value, economic freedom loses its necessary relationship with the human person, and ends up by alienating and oppressing”.

The political system evolving in Ireland was not one that aims at national cohesion, Dr Martin said and this was underlined by the fact that a large number of Irish people opt to support independent politicians – pointing to a lack of confidence in the traditional parties and perhaps even a lack of trust in “the political party” as we know it.

“Certainly the emergence in most European countries of coalition governments means that while you vote for a particular election manifesto, what you actually get is not a coalition of manifestos but a compromise of manifestos,” he observed.

Questioning where discussion taking place about the wider issues of what political parties are there to do in Irish society, the Archbishop challenged “Is pragmatism and spin-doctoring a safer bet?”

The first thing that the Church must do in post 2016 Ireland, the Archbishop said, is carry out continuous “reality checks”.

However, he said he regretted using that term in a recent RTÉ interview as the media had taken it up in a number of ways and no two stories had the same interpretation of what he had intended.

“Perhaps I gave mixed messages. The problem is that it is reality that is mixed and there are no black and white definitions of that reality and no black and white solutions, and media are not always good at accommodating subtleties.”

The leader of the Church in Dublin acknowledged that the Catholic Church in Ireland will never again be the Church that it was twenty or even ten years ago.

But there are many positive elements in today’s religious culture but also many elements which are less compatible with the Gospel message.

“Things are improving within the Church but the moment I say that the Church has turned the corner the temptation is to think that things can now go back to where they were before,” he admitted and he warned that there are signs within the Church that some – even young people – are seeking refuge from the challenges of life by adapting ways of the past and are retreating from dialogue with the present into the false security of imaginary better times.

“The statistics show that the future of the Church will be a very different future”, he said as he highlighted that there are many great things happening.

“Despite all the criticism of the Church, I think that there is very little doubt that among the most respected categories of people in Irish society today “our local priest” must be in the top five and for good reason.”

There are green shoots of change, but people see the green shoots in different places and at times in situations which will need more than “converging parallels” to bring them to a sense of cohesion.

However, the Primate of Ireland warned that an anything-goes Catholicism will never lead to cohesion.

Outlining the challenges and possibilities, he said there are many indications that a “residual cultural Catholicism” is still strong in Irish culture and that should not be written off easily.

However, he added that it would be foolish to ignore the fact that that Irish cultural Catholicism has a clear generational sell-by-date printed on it.

“The Irish Church needs a new generation of strong and articulate lay men and women.  It needs a strong laity which is not inward looking or caught up simply in Church structures and activities.”

He emphasised that Pope Francis is clear that to renew itself the Church must reach out and must discern that renewal also within the economic and existential peripheries of our world.

“We need a new generation of Catholic lay men and women who are articulate in understanding their faith and feel called to bring the unique vison which springs from their faith into dialogue with the realities of the world.”

Archbishop Martin concluded by expressing the hope that in the run up to the 2016 celebrations, historians will take a closer look at the religious roots of the thought of the main protagonists of the Easter Rising.

“They were men and women, not always supported by Church leaders, but who were nonetheless able to develop a remarkable social manifesto in a Republican Proclamation which emerged from leaders who were unapologetically proud of the fact their ideas were inspired ‘in the name of God’.”