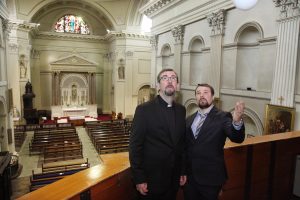 Next Sunday, Bishop Wiesław Lechowicz, Chairman of the Polish Bishops’ Council for Emigrants will act as the main celebrant at a Mass to mark the 170th anniversary of St Audoen’s Church in Dublin.

The Mass is part of a series of events taking place over September and October to tie in with a number of significant anniversaries for the Church and its parishioners.

Speaking to CatholicIreland.net, Fr Stanislaw Hajkowski SChr of St Audoen’s said the presence of Bishop Lechowicz at the celebration of 170th anniversary of dedication of St Audoen’s Church would be “a sign of respect for the Irish Church and her tradition”.

According to Fr Hajkowski, Bishop Lechowicz is one of the most active Church leaders in Poland in promoting new forms of evangelisation and reaching out to those who left religious practices.

“One of his roles is seeking opportunities for cooperation between Polish young immigrants and local youth in responding to John Paul II’s call for new evangelisation of the world.”

Fr Hajkowski said the parish would like to see former Irish parishioners from St Audoen’s or their descendants at the Mass. The homilist at the 6pm Mass will be Mgr Tom Stack.

This Mass will be followed a week later by a special Mass of thanksgiving on 25 September at 6pm to mark the tenth anniversary of the passing St Audoen’s church to the Polish Community in Ireland.

Archbishop Diarmuid Martin of Dublin will act as the main celebrant and as homilist and concelebrants will include Bishop Ray Field, Chairman of the Council for Immigrants and Rev Ryszard Głowacki SChr, Superior General of the Society of Christ.

The Mass will be followed by a special anniversary concert of Polish medieval and modern sacred music. The choir, which will be drawn from St Audoen’s Church and other Polish chaplaincies, will be under the baton of Dorota Józefiak. 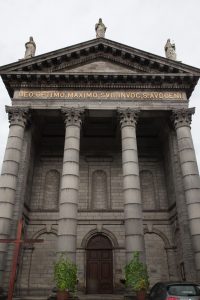 On 15 October, five historians specializing in the history of the Middle Ages, two Irish, two Polish and one from Denmark, will present their papers in English.

Fr Hajkowski explained to CatholicIreland.net that “in the tenth and eleventh century many Irish monks went to Poland to proclaim the Good News. Now, in many Irish dioceses the Polish chaplains serve both, the Polish and Irish communities. Close to 20 Polish priests serve only Irish communities – it is like a favour returned after ten centuries.”

The conference is taking place on 15 October in Glendalough Hotel and is open to the public. Those interested to participate are asked to write an e-mail with a name to: [email protected] in order reserve place.

The conference line-up is as follows:

‘Friendship and Community; its form and importance in the Past and in the Future’

10.10am Marcus Losack: ‘An Introduction to Glendalough, it origins, brief history sketch to its abandonment to Dublin’

Marcus Losack is an expert on Celtic Christianity and also leads Celtic Pilgrimages. He is author of many books including the recent ‘The letters of St Patrick’ (2016) and with Fr Michael Rogers the much re-published ‘Glendalough; A Celtic Pilgrimage’ (1996 1st ed), Columba Press, Dublin. He is director of the Ceile De Centre  and will give a presentation on the history and layout of Glendalough (The City of God).

Session No 1 and Plenary Talk

‘The movement of Irish Missionary Monks across the Europe Continent’

‘Friendship and the Internal Dynamics of Celtic Monastic Communities’

‘Celtic Missions in Central Europe with focus on Poland’.

Then on 16 October at 12:30pm, the Papal Nuncio to Ireland, Archbishop Charles Brown, will offer a Mass in thanksgiving Mass at St Audoen’s for the pontificate of St John Paul II.

The choir, Cantate Deo, drawn from the Polish chaplaincy in Limerick will sing under the baton of Anna Banko at the Mass. After the Mass, the Choir will perform a concert of sacred music.

Fr Hajkowski told CatholicIreland.net that before coming to Dublin, he had been a curate in the diocese of Dromore (2007-2013).

Before coming to Ireland, he was a parish priest in Silver Spring, Maryland and a financial director of the North American Province of the Society of Christ in the USA.

The Society of Christ is a religious order founded by Cardinal August Hlond on 8 September 1932. Cardinal Hlond was Primate of Poland and participated in the Eucharistic Congress in Dublin in 1932.

The mission of the order is to organise pastoral care for the Polish immigrants and cooperate with the local Church in spreading devotion to the Eucharist.

“The mission of the Society of Christ could be compared to the missions of the Irish priests from All Hallows Seminary, Dublin,” Fr Hajkowski said.

On 17 September 2006, St Audoen’s Church was transferred to the Polish community in Dublin. Fr Jaroslaw become its first Polish rector and chaplain for the Polish immigrants in Dublin.

The Irish Bishops Conference nominated Fr Jaroslaw coordinator of Polish chaplains in Ireland and for organising pastoral care for the Polish immigrants.

In 2013, when Fr Hajkowski became rector of St Audoen’s Church and coordinator of the Polish chaplains in Ireland, there were 30 chaplains serving different Polish communities in around 20 dioceses.