Home > News > Policy vacuum on climate change must be reversed 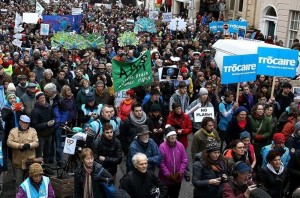 As negotiators from 195 countries continued their talks towards reaching a deal aimed at reducing global carbon emissions, the executive director of Trócaire said Ireland must prioritise meeting the EU-wide 2020 target to reduce emissions by 20%.

“Ireland’s national long-term vision is presented in climate legislation, which sets out our intention to substantially cut CO2 emissions by 2050, while developing an approach towards carbon neutrality in the land sector that does not compromise our capacity for food production,” he said.

But talking to reporters, the Taoiseach said the targets set by the EU Commission for 2020, which called for a 20% reduction of emissions compared with 2005 levels were “unrealistic” and “unreachable”.

Describing these comments as “worrying” Éamonn Meehan said the reason Ireland was lagging behind on its commitments was because of “the absence of concrete action on climate due to the absence of any climate policy since 2012.”

“This policy vacuum has meant that key policies for economic recovery have been developed in the absence of any real consideration of our climate emissions. This situation must now be reversed,” said the executive director of Trócaire.

Mr Meehan welcomed the passage of the Climate Act into law in Ireland, but was critical of the 18-month time frame outlined for the production of the first national mitigation plan.

“If we do not agree a national plan until 2017, as envisaged by this legislation, we will have less than three years to meet our commitments. The production of this national plan must now be prioritised.”

Last Sunday over 785,000 people from every corner of the world took to the streets to ask governments to take action on climate change as world leaders gathered in Paris for the 21st UN Conference of Parties Summit, which will decide on binding measures to curb greenhouse gases.

The talks run until 11 December.

In Dublin over 5,000 people marched while smaller marches took place in Belfast, Cork, Naas and Galway.

“The atmosphere at the Dublin March was one of solidarity,” Lorna Gold policy analyst with Trócaire told CatholicIreland.net.

“As I stood on the stage and addressed the crowd, it was evident that people are ready to make changes themselves but want leaders to step up too.”

Dr Gold said she felt that the “germ of a movement that will not stop” was born with Sunday’s marches.

“The march reminded me of what theologian Richard Rhor calls ‘third force wisdom’ – the future that is seeking to be born, rather than what is dying. In addressing climate change, the key thing is to focus on the change we need to see and which Pope Francis has pointed out to us in Laudato Sí.”

“It is a future of hope which is about to burst into being – the marches on Sunday were a flourishing of that hope.”

Trócaire is running an on line petition addressed to An Taoiseach Enda Kenny, saying his comments that “climate change is not a priority” for Ireland are “offensive and irresponsible” and calling on him to “set ambitious targets to reduce carbon emissions”.

Members of the public can sign the petition at: https://uplift.ie/cop21