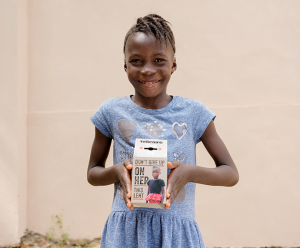 A seven year old girl who  survived both Ebola and mudslides in her short life is pictured on the one million Trócaire boxes to be distributed this Lent.

This year, the Trócaire box tells the story of Kumba, a girl from Sierra Leone, who in the words of Eamonn Meehan, Trócaire Executive Director,  “At the age of just seven, Kumba has already survived an Ebola outbreak that killed 4,000 people and a mudslide that killed 1,000 people. Her young life has been spent in an almost constant state of crisis. Only 20% of her community survived.”

Launching the Lenten campaign, he highlighted the growing numbers of people, including children, who are trapped in humanitarian crises. 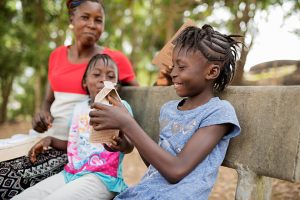 Kumba with her mother and sister.

He explained that the Lenten campaign comes at a time when conflict in many parts of the world has left millions of people at risk of famine and disease. The annual appeal from Trocaire for funds to support such people, involves the distribution of a collection box and information pack via churches all over the country. Additional information and resources, for schools and parishes are also available.

“The work Trócaire does promoting human rights, women’s empowerment and access to resources such as land and water is key to building strong and peaceful societies. That work is powered by our annual Lenten appeal. We will use donations to our campaign to support over two million of the poorest and most vulnerable people around the world this year,” said Eamonn Meehan. He thanked the parishes, schools and families all over Ireland who make this work possible.

In the financial year 2016-2017, some €22.2 million was donated to Trócaire, of which approximately one third or €7.4million was given during the Lent campaign. The charity’s work directly benefitted the lives of over 2.6 million people in 23 countries across Latin America, Asia, the Middle East and Africa.