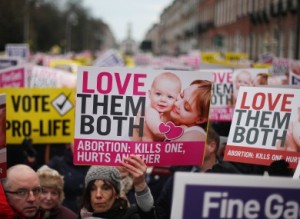 The Pro Life Campaign has said reports that an unborn baby was delivered at 25 weeks by caesarean section though the baby was nearly aborted when two psychiatrists backed the mother’s request for an abortion highlights the “horror and deep seated flaws” in the Government’s legislation.

A report in Saturday’s Irish Independent states that the mother of the baby said she was suicidal and requested an abortion under the new Act.

Two psychiatrists assessing the case acceded to her request but the obstetrician on the three-person panel argued that, given how far on the pregnancy was, the baby should be delivered.

The Protection of Life During Pregnancy Act says that a termination can be carried out if a woman’s life is at risk, including from suicide.

According to RTE, the woman began a hunger strike and the HSE sought an order from the High Court to allow it to hydrate her by giving fluids. The order was granted.

A second court date was set but was later withdrawn after the woman agreed to have the baby delivered by caesarean section.

Today’s Sunday Times reports that the woman was the victim of rape.

The baby is being cared for in hospital at the moment.

Commenting on the case, Pro Life Campaign spokesperson, Dr Ruth Cullen said, “It is agreed on all sides that abortion is not a treatment for suicidal feelings yet the Government pressed ahead and railroaded through legislation that is not evidence-based and provides for abortion based on a threat of suicide.”

“We now have the situation where doctors are placed in the position of making decisions knowing there is not a shred of evidence to back any of them up.”

“Reports that an unborn baby was recently delivered at 25 weeks, citing provisions in the new abortion Act, underlines the horror and deep seated flaws of the Government’s legislation,” Dr Cullen stated.

She added, “To induce a pregnancy at such an early stage inevitably puts the baby at risk of serious harm, such as brain damage, blindness or even death.”

“To put a defenceless baby through all this, and to pretend the intervention is medically indicated when it is known that there is no evidence to back it up, is a chilling aberration of law and medicine.”

“The fact that the panel could just as easily have sanctioned an abortion in this case also brings home everything that is wrong about the new law,” the PLC spokeswoman said.

“The Government successfully packaged the law as a life-saving measure even though it is nothing of the sort. Although it is going to take time, as more and more people begin to realise what the law actually provides for, support for it to be repealed will grow and grow.”