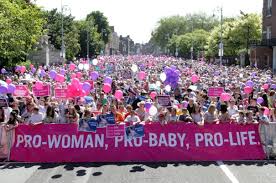 The Pro Life Campaign has hit out at Independent TD, Mick Wallace, over his plan to introduce a bill to extend the abortion law.

The Deputy’s proposal would make abortion an option in situations where the unborn child has a terminal illness.

Responding to these developments, PLC spokesperson, Caroline Simons, described Mick Wallace’s proposal as “further evidence of a focus on abortion, rather than care, in the case of babies with terminal illness.”

“In these difficult situations, families should be offered adequate support through peri-natal hospice care facilities after receiving poor pre-natal diagnoses,” she said.

“Describing the ending of the life of a terminally ill baby as ‘medical treatment’ is simply not acceptable. A medical treatment is one that aims to save a life not end one.”

“Many families who have received a poor pre-natal diagnosis have experienced much more precious time with their child than originally expected, or found that their child’s illness was not as serious as originally thought or in some cases there was nothing wrong at all.”

“The discussion in the Dáil and much of the media on this issue has become completely one-sided. It is time for a more open and honest debate. This latest proposal from Mick Wallace and that of Clare Daly last week, fail to examine possible alternatives.”

In the Dáil, Deputy Wallace asked for leave to be granted to introduce a bill entitled an act to permit medical treatment leading to termination of pregnancy in situations where the foetus has a fatal abnormality such that it is incompatible with life outside of the womb.

He told the chamber that this bill would allow for an abortion in cases of fatal foetal abnormalities.

“Although the Government had a chance to include such cases in its Protection of Life During Pregnancy Act 2013, it failed to do so by bowing to pressure from right-wing anti-abortion advocates,” Deputy Wallace said.

He claimed that this had left “many people in unnecessarily stressful situations where they know that their pregnancies are unviable. This means that women are either forced to continue with those pregnancies in the full knowledge that the foetuses will not survive or must travel to England to seek terminations.”

He also commented that the Government “seems to accept that women’s health care needs should be taken care of by Britain regardless of the added stresses that this entails for women in need of care or the cruelty it inflicts on people in distress.”

He said he applauded the continued efforts of the campaign group Termination for Medical Reasons, including its recent submission to the UN Human Rights Committee.

Meanwhile, the PLC has responded to the United Nations Committee Against Torture (UNCAT) questioning of Ireland’s abortion laws.

The Pro Life Campaign criticised the UN Committee for neglecting basic human rights, claming the Committee Against Torture had “never voiced concern over babies born alive after abortion and left to die.”

PLC spokesperson Cora Sherlock said a committee under the auspices of the UN “should be promoting a gold standard of care and respect for life rather than callously affirming abortion.”

“For a body that derives its moral authority from the Universal Declaration of Human Rights, which affirms everyone’s right to life, it is tragic that this Committee is inverting that standard of human rights by calling on Ireland to allow for the destruction of innocent unborn babies.”

“Where do the members of the UN Committee Against Torture stand on the rights of babies born alive after abortion and left to die?” Cora Sherlock asked.

“We know the answer to this question. The Committee Against Torture has never voiced concern on this matter or challenged this situation in countries where we know it happens.”

“For example, the Confidential Enquiry into Maternal and Child Health, 2007 commissioned by the UK Government, found that 66 infants survived NHS termination attempts in hospitals in England and Wales during 2005.

“Instead of dying during the abortion procedure as intended, they survived and were able to breathe unaided. But they received no medical attention or care and were left in corners to die. One of the babies lived for ten hours.”

“What is more tortuous than this and how can the United Nations Committee Against Torture remain silent on this barbaric practice?” she concluded.