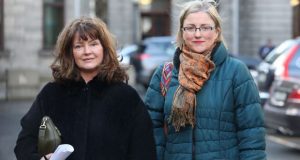 Caroline Simons and Cora Sherlock of the Pro Life Campaign

The Pro Life Campaign is disappointed at the denial of its application to be added to a Supreme Court case dealing with the rights of unborn children in the Constitution.

“We are disappointed that the State opposed our application.  Our approach is always to ensure that the rights of mothers and the rights of the unborn boy or girl in the womb are protected.  The State should have no difficulty with such a position,” said Caroline Simons, Pro Life Campaign (PLC) spokesperson, speaking outside the Court after the Supreme Court decision on 7th February 2018.

“We accept the Court’s decision but consider that it may be deprived of an important perspective as a result. The Pro Life Campaign will continue to articulate a generous understanding of the rights of mothers and their unborn children,” she said.

Three judges made the ruling that denied the PLC’s application to become an impartial adviser or ‘amicus curiae’ in a Supreme Court case on defining “the unborn” in the Constitution.

The judges said that this was an issue of law, with no medical or social issue, and both parties in the case were already legally represented. They also said they had to consider the impact that the PLC  involvement would have on the upcoming Eighth Amendment Referendum.

The judges’ decision on the case may itself impact on the Eighth Amendment Referendum campaign.
The case involves an appeal by the State on a High Court 2016 decision when it ruled that the use of the word “unborn” in Bunreacht na hÉireann (Constitution of Ireland) meant an “unborn child”, with rights extending beyond the right to life.

If the original High Court ruling is upheld, it may lead to difficulties as it could allow for the unborn to have the legal right to remain in Ireland (for example in the case of the deportation of parents), but the repeal of the Eighth Amendment and the subsequent passing of a law may allow for the same child to be aborted.

The Supreme Court case is expected to be heard at the end of February 2018.