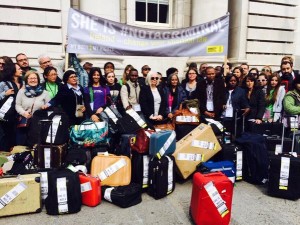 The Pro Life Campaign has lashed out at Amnesty Ireland over Thursday’s demonstration outside Government Buildings which called for the repeal of the 8th Amendment.

Among the participants who took part were a number of international delegates attending Amnesty’s International Council Meeting in Dublin this week.

They brought with them over 80 suitcases to signify the number of women from Ireland who travel to the UK each week to obtain an abortion, totalling over 4,000 every year.

In a statement, the Pro Life Campaign (PLC) said the demo was “a further sad reminder that the organisation has drifted very far from its founding principles and is now a de facto abortion lobby group.”

Sinead Slattery of the PLC accused Amnesty Ireland of “constantly” berating Ireland over its abortion laws while refusing to condemn “horrific human rights abuses” such as those babies that survived botched abortions in Britain and Canada and are routinely left in the corners of hospitals to die alone without receiving any medical attention.

“Amnesty has no credibility reprimanding others on abortion while it refuses to intervene and do something about these barbaric practices happening in the name of ‘choice’,” she added.

The PLC spokeswoman said that while Amnesty’s spokespeople are happy to criticise Irish laws on abortion they refuse to acknowledge that there are tens of thousands of people alive in Ireland today because of the Life Equality Amendment (8th Amendment) introduced in 1983.

“Some of our most active supporters considered abortion at some point themselves but changed their mind at the last minute and today cannot believe that they ever contemplated ending the life of their child,” she explained.

According to Sinead Slattery there is nothing in Amnesty’s campaign that takes account of these realities or the fact that many women deeply regret the decision they made to abort their child.

Elsewhere, the PLC spokeswoman accused Amnesty of turning a blind eye to the international debate over the videos emerging from an undercover investigation into Planned Parenthood clinics in the United States.

“Despite the horror of what has come to light regarding the harvesting and sale of the body parts of unborn children, Amnesty has not added its voice to those expressing outrage at these blatant human rights abuses,” she highlighted.

Admonishing the group, she said it was no way for an organisation that wants to be taken seriously as a human rights defender to behave.

“It is a further, sad reminder that Amnesty has drifted very far from its founding principles and is now a de facto abortion lobby group,” she stated.

However, on Thursday, Executive Director of Amnesty International Ireland, Colm O’Gorman said, “There is no excuse for the outsourcing of Ireland’s human rights obligations and it cannot continue.”

He highlighted that since 1971, at least 177,000 women and girls have had to leave Ireland to seek an abortion.

He demanded that Ireland repeal the 8th amendment and legislate for abortions “at a minimum, on the grounds specified in international human rights law, namely in the cases of rape, incest, risk to the health of the woman or girl, or severe and fatal foetal impairment”.