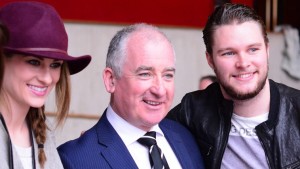 Jack Reynor pictured with the headmaster of Belvedere, Gerry Foley, and his fiancée Madeline Mulqueen.

Irish actor, Jack Reynor, who is a former student of the Jesuit school Belvedere College, has won the World Cinema Special Jury Prize for acting at this year’s Sundance Film Festival in Park City, Utah.

He received the award for his role in Gerard Barrett’s film ‘Glassland’, also featuring Academy-Award nominee Toni Collette, Will Poulter, and Michael Smiley.

The film which is set in Dublin tells the story of a young taxi driver on the fringes of the criminal underworld, who in an effort to save his mother from addiction and unite his broken family is forced to make a life changing moral decision.

The actor was ecstactic to take the accolade at the festival which is the most important event for independent film in the calendar.

“I’m absolutely thrilled to have been considered and to have won a prize at Sundance this year,” he said. “It’s definitely a reflection of the work of everybody who was part of the film and I’m incredibly proud to have worked with all of them.”

He previously had a leading role in Lenny Abrahamson’s ‘What Richard Did’ in 2012 before going on to appear in the Hollywood production ‘Transformers: Age of Extinction’ in 2014.

‘Glassland’ was produced by Dublin-based Element Pictures and supported by the Irish Film Board.

There has been much acclaim for the film following its recent premiere in the US.

The Hollywood Reporter commented on Jack Reynor’s “exceptional work” in this “quietly impressive drama” while The Guardian remarked “The tears in Glassland catch you unawares. This is not your run-of-the-mill weepy, nor your archly-crafted Oscar bait”.