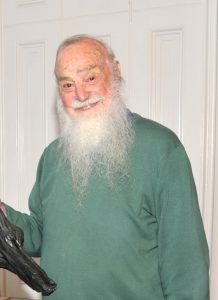 There are few priests who live to celebrate the 70th anniversary of their ordination – as Fr Norman points out:

The nonagenarian well remembers the day when it first occurred to him that he might have a vocation. “I was nine years old and was running around our parish church in Birmingham – which at the time was no more than a shed. The parish priest came out and asked me what I wanted to be when I grew up and I said ‘A missionary!’

“Two years later a Divine Word Missionary came to call to the parish and our priest told him he should see me. I sat down with him and gave him my personal details and a year later I joined the minor seminary, aged 12.”

Eight years after his ordination, Fr Norman was sent on the missions to India. His remarkable beard dates from this time: “I went on a pilgrimage and wasn’t able to shave for three days and I decided then that a beard suited me.”

After 10 years in India, he was transferred to Papua New Guinea, where he served on the missions for another 30 years.

In Papua New Guinea Fr Norman served first at a coastal region, but the climate there nearly did for him as he became infected with malaria and, subsequently, cerebral malaria. As a result, the missionary’s doctors advised him to move to the highlands, away from mosquito infested regions. “In the highlands of Papua New Guinea, it’s about 30 °C during the day and 12 °C at night, with no winter. It’s a lovely climate,” said the nonagenarian.

Fr Norman still celebrates Mass, he drives and, until recently, he regularly cycled more than 10 miles a day. “I have had a bit of trouble with an aneurysm, so I have had to take it easy, but I hope to get back on my bike soon,” he says.

For his jubilee celebration, Fr Norman will be joined by his 90-year-old brother Gerrard Francis, who is travelling over from England to be with him, as are the nonagenarian’s nephews and nieces. “I am looking forward to it,” he said. “It will be a lovely day.”

In the meantime, the Divine Word Missionaries continue to benefit from new vocations. Founded in the Netherlands in 1875, the society is active in 67 countries across the globe and has a membership of about 6,000, more than 4,000 of whom are priests. Last month, a young Chinese man, Joseph Yang Shuai, was ordained as a priest of the order in Portlaoise.