A plaque to honour the Presentation Sisters of Castleisland and their foundress, Mother Joseph Harnett, was unveiled at the library in the Co Kerry town this week.

The association between the Presentation Sisters and Castleisland goes back to famine times.

The Sisters were founded by Venerable Nano Nagle in 1775.

The order first came to Castleisland in October 1846 when Mother Joseph Hartnett, a native of Sandville, established a new foundation.

In 1850, thanks largely to the financial contribution of Michael Hartnett, brother of Mother Joseph, a school run by the Sisters was opened.

From 1927-1945 a ‘Secondary Top’ operated within the primary school system and in 1945 it was decided to open a separate secondary school.

Rooms were rented in the then parish hall (now the Veterinary Centre) and Presentation Secondary School was opened in September 1946.

In 1951, the location changed to the Imperial Hotel (now Castletown House) and over 100 girls were enrolled. 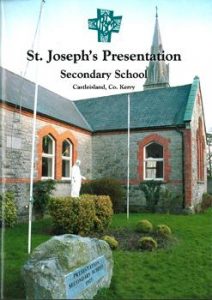 Speaking at the unveiling of the plaque, the Mayor of Killarney Cllr Bobby O’Connell said, “Castleisland owes Mother Harnett a debt of gratitude for all she had done for the area.”

He continued, “The arrival of Mother Joseph Harnett back to her native Castleisland during those dark days brought light to a lot of people in the area. Many depended on the convent for years for the sustenance which made the difference between life and death.”

Speaking about the work of the Presentations Sisters in Castleisland, Cllr O’Connell said “In fact, the Presentation Sisters who followed her, kept up a discreet level of support for a couple of generations of school children who were in need of food at lunch-time.”

“This was done by means of a tray of sandwiches placed in a hallway of the Nano Nagle primary school just before lunch-time each school day. Those lacking food made their way and took what they needed from the unattended tray.”

This week’s plaque unveiling is not the first plaque to be unveiled to the Presentation Sisters in the town.

A marble plaque in honour of Mother Joseph Harnett, who was born in Sandville House in 1798, was unveiled in the Church of Ss Stephen and John in Castleisland on 13 October 1998 to mark the bi-centenary of her birth.