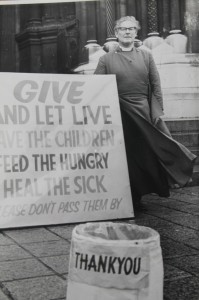 A plaque is to be erected at St Anne’s Cathedral in memory of Belfast’s first Black Santa, Dean Sammy Crooks, who ‘touched the heart of Belfast’.

The Blue Plaque, to be erected by the Ulster History Circle, will be unveiled at the West front of the cathedral in Donegall Street, Belfast, on Friday 12 December, when the present Dean, the Very Revd John Mann, will begin the 38th annual sit-out.

Dean Crooks, who died in a road accident in 1986, staged his first Christmas sit-out for charities in 1976, establishing a tradition continued by all his successors.

Dean Crooks’ son Sam Crooks will unveil the plaque, which commemorates a man who had the Cathedral and the City of Belfast in his heart. It is funded by Belfast City Council.

Samuel Bennett Crooks was born on 20 January 1920 in Killough, Co Down, where his father was rector.

He was educated at Down High School, followed by studies at Trinity College, Dublin, leading to his ordination as a priest in the Church of Ireland.

After a period serving as Dean’s Vicar and Vicar Choral at St Anne’s Cathedral, he was instituted as rector of St John’s Parish Church, Orangefield, where he raised funds and supervised the building programme.

He was later rector of Shankill Parish, Lurgan, and was appointed Archdeacon of Dromore and Rural Dean of Hillsborough.

In 1970 at the age of 50, Archdeacon Crooks was installed as Dean and Vicar of Belfast in St Anne’s Cathedral.

Never one to be daunted by difficult situations Dean Crooks set about raising major funding to complete the Cathedral, a project that had been on-going since 1899.

He presided over the building of both transepts, housing a military chapel and the aptly named Chapel of Unity, which became a vibrant ecumenical centre, bringing together people from across the religious divide in the city and beyond. 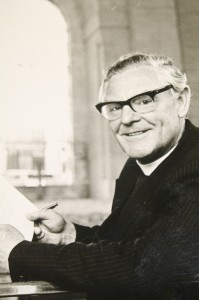 Dean Sammy was a charismatic man. He could be straight talking and was intolerant of time wasting, but he was also warm, jovial, compassionate and welcoming.

In 1975, after severe flooding in Bangladesh resulted in many thousands of deaths, the Dean decided to stand on Donegall Street outside his Cathedral to collect money for the disaster appeal.

This impromptu collection was so successful that he was persuaded to repeat it the following Christmas, using the slogan: ‘Give and let live. Save the children, feed the hungry, heal the sick. Please don’t pass them by.’

He realised that those in Northern Ireland had given generously to his building fund over the years, and it was now time for the Cathedral to be seen to support local charities.

And so began the ‘Dean’s Sit-out’ which has become a major part of the Christmas tradition in Northern Ireland. Dean Sammy was dubbed Black Santa by the media and community.

The Dean was awarded the OBE in 1981, chiefly for his services to charity

Sadly, soon after his retirement, Dean Crooks died in a road accident on his way to a meeting at St Anne’s. He was 66.

A headline in a local newspaper stated: ‘The Pilgrim passes on… Thousands mourn the man who touched the heart of Belfast.’

Looking ahead to the unveiling of the plaque, Dean Crooks’ son Sam said, “My father would have seen this Blue Plaque as recognition of the generosity of the people of Northern Ireland. Every year – in the worst of the Troubles – he was amazed at how much people gave to those who were less well off in our society.”

The Ulster History Circle, formed in the 1980s, is a voluntary organisation that places commemorative plaques in public places in towns and villages all over Ulster in honour of men and women who have contributed to Northern Ireland’s history.

Chris Spurr, chairman of the Circle, said: “Dean Samuel Crooks will long be remembered, in Belfast and beyond, for initiating the ‘Dean’s Sit-out,’ now an annual charitable event at St Anne’s Cathedral as Christmas approaches.

“The Ulster History Circle is delighted to honour Dean Crooks, the original ‘Black Santa’, with this Blue Plaque, placed near the Cathedral steps where his ‘Sit-out’ first began. The Circle would particularly like to thank Belfast City Council for their financial support towards the plaque.”

The present Dean of Belfast, the Very Revd John Mann said: “It is fitting that Dean Sammy Crooks, founder of the Black Santa tradition, should be honoured in this way in the Cathedral that he loved and that loved him in return.”

“Dean Crooks believed in the generosity of the people of Belfast and Northern Ireland and they never failed him. That generosity of spirit has continued for almost four decades and I feel privileged today to be able to launch the 38th Sit-out for charities on the steps of St Anne’s.”