Home > News > No plans to remove Bibles from ROI Travelodge

No plans to remove Bibles from ROI Travelodge 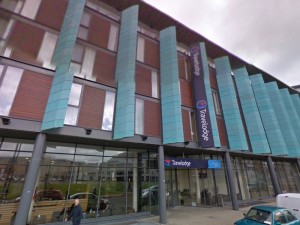 Travelodge, the budget hotel chain in the UK, Ireland and Spain has announced that it has removed Bibles from its hotel rooms in the UK.

However, according to employees, so far the move is not planned for the Republic though a receptionist in Limerick’s Travelodge said, “We are a franchise”.

In Belfast, bibles were removed from the Travelodge Hotel some years ago.

“We used to have them but we stopped a few years ago,” receptionist Aisling McAteer told CatholicIreland.net

“When we were leaving them in the rooms they were getting damaged.”

She said copies are kept at reception for those who request them.

Travelodge claims that it has made the decision for its UK chain “in order not to discriminate against any religion” although it appears that there had been no complaints previously about the presence of Bibles in the rooms.

Commenting on the move, the Catholic Union’s chairman said the action was at once bizarre and sinister.

“The Bible is a hallmark of our European and indeed to some extent, our global culture. Not only do millions believe it to contain the Word of God, but it is also well on the way to being the best-selling book of all time, with over 100 million copies sold each year,” said Robert Rigney.

“For countless people, the Bible is a source of encouragement, comfort and indeed prayer. It contains some of the most stirring accounts of the history of a people’s growing relationship with God, as well as pieces of the most sublime love poetry ever written, such as the Song of Songs and those great pieces of description of the human drama in relation to God – the psalms.”

A Church of England spokesman commented, “It seems both tragic and bizarre that hotels would remove the word of God for the sake of ergonomic design, economic incentive or a spurious definition of the word ‘diversity’.”

He added that Bibles in hotel rooms were important to provide “hope, comfort and inspiration to travellers.” 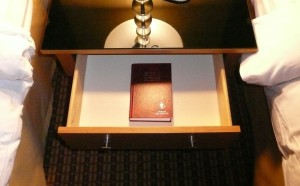 While bibles are gone from rooms in Belfast, Derry retains them.

At Dublin Airport most of the rooms have bibles.

“We are supposed to provide them,” Lena Palmane a supervisor at the hotel told CatholicIreland.net  “There are no plans to get rid of them.”

The Chairman of the Catholic Union said the move to remove bibles would do little to bolster the chain’s image “displaying as it does a corporate view and appreciation of strictly secular values, over the more human and emotional aspects of its clientele and others”.

The practice of placing Bibles in British hotel rooms originated with the Commercial Travellers’ Christian Association late in the Victorian era.

The organisation was founded in 1888, with backing from the owners of biscuit manufacturer McVitie’s, and donated bibles to hotels around the country.

In more recent years, the work was taken over by the Gideon Society, which distributes free Bibles in almost 194 countries worldwide.