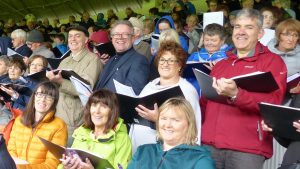 A choir of up to 3,000 people from across all 26 dioceses will sing at the Papal Mass in the Phoenix Park for Pope Francis later this month.

Many more will contribute to the congregational singing with their own parish choirs in the corrals spread across the Park.

The closing Mass of World Meeting of Families 2018 will take place on Sunday 26th August at 3pm. Pope Francis will celebrate this Mass, which is expected to have a congregation of 500,000 people including 15,000 visitors from overseas.

On Saturday, 2,000 members of the Papal Mass choir took part in the first large-scale rehearsal in Dublin and did a full run-through of the music for the closing Mass of WMOF.

Spokeswoman for WMOF2018, Brenda Drumm, told CatholicIreland that the music at Saturday’s rehearsal was “uplifting”. She commended the generosity of all of those who have been rehearsing at diocesan level over the past few months.

While individuals and choirs have been rehearsing together locally in their dioceses for a number of months, this was the first time that the countrywide group was brought together.

Commenting after the rehearsal, liturgical music coordinator Derek Mahady said he was heartened by the work and effort that each diocese has put into the preparation of the music for the Papal Mass.

“The coming together of so many voices in song has given all of us involved in leading the music a sense of how uplifting it will be for all those families gathered for the closing Mass of WMOF2018 with Pope Francis,” he said.

Organisers of WMOF2018 have announced the full details of the Liturgical music and the music team for the Papal Mass. The music team includes:

The music chosen for the Papal Mass will place an emphasis on congregational singing, so many of the pieces will be familiar to those in the congregation of 500,000.

Irish music and composers feature prominently throughout the Mass.

The opening hymn is “A Joy for All the Earth”, the official hymn for WMOF2018, written by Ephrem Feeley.

Well-known liturgical composer Fr Liam Lawton has composed a new Psalm for the Mass which is called “The Lord Hears the Cry of the Poor”.

Fintan O’Carroll’s “Celtic Alleluia” with an enhanced verse by Ronan McDonagh will be sung as the Gospel acclamation.

The Apostles’ Creed will be John O’Keeffe’s own composition of the same name, while Fr Pat Ahern’s “A Thiarna Éist Linn” will be sung between the prayers of the faithful.

As this is a World Meeting of Families there will be a number of international composers featured in the Mass. “Caritas et Amor” by Z. Randall Stroope has been chosen for the presentation of gifts, and three pieces from Jean-Paul Lécot’s Mass of Our Lady of Lourdes will feature as the gloria, sanctus, and doxology/amen.

And finally, the anthem to Our Lady will be “Go mBeannaítear Duit, A Mhuire” by Peadar Ó Riada (son of Seán), and the recessional hymn will be “Jesus Christ, You Are My Life” by Mon Marco Frisina.

Organisers have said that tickets for the Papal Mass in the Phoenix Park on 26th August will be issued by email as a print-at-home ticket on 10 August.