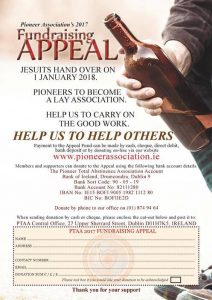 At the launch on Tuesday (14 March), the much loved Irish institution said the appeal is necessary to safeguard its financial viability. This is especially true as the PTAA prepares to become a Private Lay Association of the Faithful when the Jesuits’ involvement ceases as of January 2018.

“We would like to thank the Jesuits for their governance and guidance of the Association over the past 120 years. The inspiration of the founder Fr James Cullen SJ to tackle the issue of alcohol abuse, which was rampant at that time in Irish society, began with four women and today the association has approximately 130,000 members in Ireland alone with many more members in countries abroad,” said Raymond O’Connor, Project Co-ordinator, PTAA at the launch of the Pioneer Appeal.

He told Catholicireland.net that as the Jesuits withdraw, the board of the Pioneers will facilitate the transition into the future, but he expects activities should continue as normal.

“It is important that we keep the charism of the founder alive, and the spirituality,” he said. “The whole mission of the Pioneer Association is about promoting moderation in society. Then there is the even deeper mission – promoting peace and harmony in the home because alcohol does have a huge effect on relationships, marriage and family life.”

The PTAA does not get any funding from the government and relies on the generosity of its members and the Irish public. Proceeds from the Pioneer magazine, Pioneer pins and raffles, quiz evenings and other fundraisers also help keep the show on the road.

Raymond O’Connor told Catholicireland.net that 12,000 new members join each year. That includes up to 8,000 young people taking ‘the pledge’ for the first time, as well as full members and short-term and temporary members. 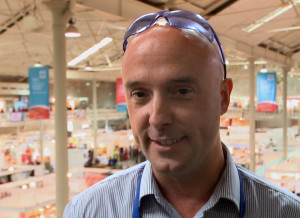 The latter join for a short period like Advent or Lent, when at least three new members from each of the 1,000 local or parish Pioneer groups join.

“There is a problem with alcohol in Ireland. We Irish have a dysfunctional relationship with alcohol in our culture … Coming up to St Patrick’s Day we encourage people to drink in moderation so it is an enjoyable day for all concerned,” he told Catholicireland.net.

Back in 2011 the finances of the PTAA reached a crisis point, and it was feared that the head office in Dublin might close. The PTAA’s Chief Executive Officer at the time, Padraig Brady, went on RTÉ’s main evening news to highlight the crisis and appeal for funds.

He also wrote a letter to all members of the PTAA stating that the association would have a deficit of €100,000 in 2011. Ireland’s recession was biting at the time, but the donations rolled in. The €130,000 collected helped safeguard the PTAA’s future.

The current fundraising activities will include a ball in Athlone in April and other fundraisers throughout the country.

Details of how to donate to the appeal are available from local Pioneer groups or Head Office on 01 874 9464, or on: www.pioneerassociation.ie.