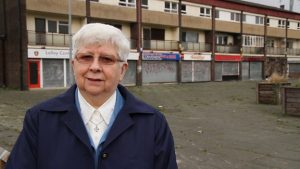 Cork-born Presentation Sister, Sr Rita Lee (71), works in the Collyhurst region of Manchester, where she runs a food bank at the Lalley Centre.

The Lalley Centre is a drop-in centre in Collyhurst, Salford, which caters to the welfare needs and services of the community.

Recently, Sr Rita was the focus of a five-part BBC series, ‘Sister Rita to the Rescue’, which aims to highlight the plight of young families and those on low salaries who are affected by government cuts and sanctions. In the documentary she met with Pensions Minister Ian Duncan Smith, and urged the British government not to “cut the benefits of the less well off”. She also told him the “sanctions were cruel”.

Now it has emerged that Sr Rita has been transferred to an as yet undisclosed new appointment, but her local community at the Lalley centre wants her back. The petition – ‘Reinstate Sister Rita at the Lalley Centre’ – praised the Sister, who has “given many years of her life” to the community.

“Sister Rita has given many years of her life to build and support the Lalley Centre in Collyhurst and has made an invaluable contribution to people throughout this area. After ten years’ service Caritas have decided to let her go and disregarded the opinions of all the centre users and local community! The Centre needs Sister Rita and so does the Collyhurst community.” The petition needs 1,000 signatures, and has so far received 530 supporters, with some expressing serious fears for the centre without Sister Rita.

In a statement issued this week to the Manchester Evening News newspaper, Caritas Diocese of Salford CEO Mark Wiggin said the diocese “would like to acknowledge the concern of local residents regarding the continuation of the Lalley Centre and its vital community services. We are committed to serving the local community by developing the services that are based at The Lalley Centre. Sister Rita Lee has worked tirelessly to support the community in Collyhurst, where the Lalley Centre is based. She will be remembered fondly, and lovingly, by all those she has helped over the last decade. We sincerely wish Sister Rita well in her future endeavours.”

The statement added that “Caritas is committed to continuing and building on her good work in North Manchester and want to reassure everyone, particularly people who use the Lalley Centre and the Food bank that we will be continuing her good work.”

The petition can be accessed here.