Home > News > Homelessness “worse than ever” according to Fr McVerry

Homelessness “worse than ever” according to Fr McVerry 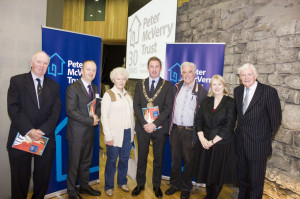 Lord Mayor of Dublin Oisin Quinn with members of Peter McVerry Trust’s Board of Directors and Pat Doyle CEO.

Political leadership is needed to end homelessness as charities can only do so much the Jesuit social justice campaigner, Fr Peter McVerry, has warned.

Speaking at the launch of the McVerry Trust’s annual report for 2012, Fr McVerry said, “After 30 years of working to eliminate homelessness, I believe the problem is now worse than ever, perhaps even out of control.”

“Homelessness is a political problem, ultimately the problem of homelessness can only be solved by providing homes for homeless people and that is the responsibility of the Government,” he added.

The report was officially launched by the Lord Mayor of Dublin, Oisín Quinn, who said it highlighted the needs of the many vulnerable and marginalised citizens in our communities who are experiencing homelessness.

“It also demonstrates the extremely valuable work that the Peter McVerry Trust does, something that I witnessed first hand when visiting their services earlier this year,” he said.

The report highlights the number of individuals who accessed Peter McVerry Trust’s services in 2012.

The charity worked with over 3,500 people across their prevention, drug treatment, homeless and housing, and under 18s residential services. The majority of those with whom the charity worked were male and 74% of all participants fell between the ages 18-35.

The majority of homeless people that the charity worked with accessed temporary emergency with the greater part of those accessing the emergency accommodation unit at Camden Hall.

The charity agreed to take over that service in October 2012 based on a commitment to close it within a set timeframe and because it wanted to greatly improve the supports available to homeless people accessing the unit.

Pat Doyle, CEO of Peter McVerry Trust, spoke about how the charity was actively progressing to delivering a housing first model.

“The essential element of the housing first model is the rapid housing of individuals in their own accommodation. This means we need to have access to stable housing units where we can place homeless individuals and build the necessary supports around them.”

He said that during 2012 the Trust had successfully acquired a further 24 apartments in Dublin to add to its existing stock. “Our housing with supports team also worked with 121 individuals helping them to transition out of homelessness through independent living,” Pat Doyle explained.

“We have also continued to develop other essential services during 2012. We opened a new drug stabilisation unit in North County Dublin which has greatly increased our ability to help individuals addressing drug misuse.”

“We also began providing new temporary emergency accommodation services in Fingal and submitted a successful tender application to provide a supported temporary accommodation unit in South Dublin, a service that we opened in the first half of 2013.”

The full annual report can be read here: http://www.pmvtrust.ie/wp-content/uploads/2013/03/Annual-Report-Web-Version.pdf