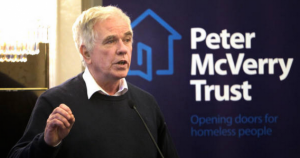 One of the country’s leading homeless agencies has urged the Government to make use of the tens of thousands of empty homes around the country to help end the homeless crisis.

As part of that call, it sought an immediate audit of the built environment to accurately determine the number of empty residential and commercial spaces, assessment of the condition these units were in, the establishment of ownership of these units, and an understanding of why spaces remained empty or underused.

This week, the charity addressed the Oireachtas Joint Committee on Housing and Local Government, and made proposals on how to make use of vacant housing.

Census 2016 information shows that around 198,000 residential units, excluding holiday homes, are vacant across the Irish State, with 50,000 of those in Ireland’s major cities. This figure equates to thirteen empty houses for every one homeless person.

Francis Doherty, Head of Communications at the Peter McVerry Trust, says there is simply no excuse not to tackle homelessness head on: “Tackling empty homes is a no-brainer. They are quick to turn around. They’re cheaper to turn around than waiting to build new homes. There are thousands of them in cities across Ireland. There are 13 empty homes for every one homeless adult. So what we would like for the committee to take on board is the urgency in addressing the issue of vacant homes and the potential they can play in solving the homeless crisis.”

In a wide-ranging submission which covered areas such derelict sites, vacant properties, unused spaces and compulsory purchase orders, Brian Friel, National Director of Housing with the Peter McVerry Trust, told the Oireachtas enquiry that “even if every empty local authority house was brought back into use it would only meet a small proportion of the social housing and homeless need. Local authorities need to become involved in the collation of data on empty properties and derelict sites of all types and sizes”.

The Oireachtas Housing Committee was told that the Government’s Housing Agency has rejected half the repossessed houses and apartments offered by banks for social housing. Figures released by agency Chief executive John O’Connor reveal that the agency was last year allocated a €70 million fund to purchase 1,600 homes over the next four years for use by local authorities and voluntary housing bodies for tenants on social housing waiting lists.

To date, the agency has been offered almost 700 homes, mostly by the country’s main banks. The agency made bids on just 347 of these homes and had their bids accepted on 305, costing €46.57 million. So far it has signed contracts for 217 homes and 29 purchases have closed. Any decision not to go ahead with a sale by the Housing Agency is made in collaboration with the local authority in question.