People of faith – key in referendum on 8th Amendment 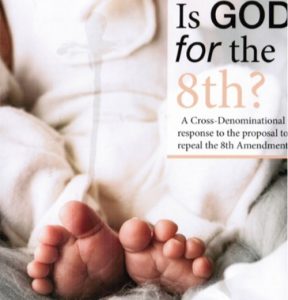 The key to defeating the referendum on the 8th Amendment lies with people of faith, according to Paddy Monaghan from the Evangelical Catholic Initiative. “According to the 2016 census, 37% go to any church once a week, but 50% go once a month. It is a very high proportion. People forget that and think it’s a secularised nation.” This 50% of the population amounts to 1.7 million people, he told CatholicIreland. “If 80% of those came out and voted and voted no, this campaign is well won.”

Almost 8,000 copies of the leaflet, which sells at a cost of 10c in Footprints Bookshop in Dun Laoghaire, have already been distributed, and a further 10,000 copies have been ordered. A Church of Ireland bishop recently ordered 500 copies for distribution to his clergy, said Mr Monaghan.

The leaflet is different to the other information available in relation to the referendum because it is coming from a specifically Christian perspective. “It took seven months to put together. We had the steering group working for 7 months to get agreement on this before we got the 120 signatories to sign it,” he said.

The leaflet, which is also available online at http://kingscourtparish.ie/2018/03/is-god-for-the-8th/, gives “God’s perspective on the unborn child”. Referring to Genesis, where it says man and woman were made “in the image of God”, it continues: “Only human life has been designed by God to possess His image. From the moment of fertilisation the human embryo is a member of a distinct species, ‘a human being’ rather than any other kind of being. Nobody because of race, sex, physical or mental disability, fails to bear the image of God. There is no ‘quality control’ system in operation before or after birth.”

Another distinctive feature of the cross-denominational response to the 8th Amendment, according to Mr Monaghan, is that it “deals with the five key problem cases” – threat to the life of the mother, rape, disability, life-limiting conditions and Down Syndrome, giving a response on each. “It is not the key issue but for the sake of those five cases, people may well vote yes, not realising they are voting for abortion up to twelve weeks. So it was important that those points be answered.”

The leaflet calls for “Responsible Christian Action” – to vote No in the referendum, to pray to God for guidance on how to help women in “challenging pregnancies and possibly unwanted children”, not to judge anyone, be prepared to engage in debate, to financially support “counselling, adoption and caring services”, to pray for politicians and to write to papers.

The leaflet concludes: “We stand at a crossroads for good or for evil. The Eighth Amendment is the last bulwark against abortion in Ireland, recognising the equal right to life for both mother and unborn child. It also represents a forward-thinking approach to human rights which, we hope, will one day be adopted by other nations. Let’s hold fast to this and do what is right.”

On 28 March, the Church of Ireland Archbishops of Armagh and Dublin brought out a statement on the referendum: “We have previously expressed our concern that the forthcoming Constitutional referendum is being understood as something akin to an opinion poll on the complex issue of abortion. However, now that the government has made known the general scheme of a Bill which it would introduce should the referendum on the repeal of Article 40.3.3 of the Constitution of Ireland be passed, voters face a stark decision,” it says.

“Although it is true that the present provision under the Constitution has proved less than satisfactory in some respects, and we suggested the possibility of a modification to the present Constitutional position, what is now being proposed by the government – if the Article is repealed – is unrestricted access to abortion up to twelve weeks of pregnancy.

“As we have said before (in our statement of 5th February – and we also refer to the wider comments made in that statement about the need for pastoral care for women, their partners and their families, and for improved support services and greater investment in medical and mental health services), unrestricted access to abortion in the first twelve weeks of pregnancy, or indeed at any stage, is not an ethical position we can accept. There is, for Christians, a very clear witness in the Scriptures that all human life, including before physical birth, has a sacred dignity in the eyes of God.”