Home > Featured > Peace and family – where the light gets in

Peace and family – where the light gets in 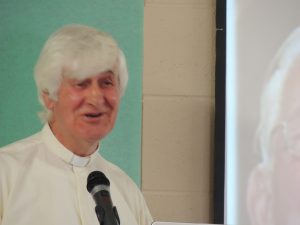 The 150 yards between the Presbyterian and the Catholic Church on Fitzroy Avenue in Belfast was one of the longest walks that Rev Ken Newell has ever made.

He told participants at the *Focolare summer meeting last weekend that over his many years working in conflict resolution and building healthy and peaceful communities he has found that: “There is nothing wrong with difference, division is the problem.”

He was brought up in a divided society where he never even entered a Catholic Church until he was 25 years old. On that first visit he realized there was something special about the Mass even though he had been taught the opposite all his life.

That was the beginning of change for him which saw him walk from his church where he was the new Presbyterian Minister to the other end of the avenue to greet the priest in the Catholic church.

Later he became part of the cross-community Clonard/Fitzroy Fellowship with Fr Gerry Reynolds. He stated that a key element that underpinned their work was friendship and sense of family. He said that Jesus was raised by a mother and father in a family for 30 years before going out to others and it was a case of “live first and talk later.”

In the past he has been chaplain on Orange Order parades, and is a former Moderator of the Presbyterian Church in Ireland. In more recent years he has worked as a conference speaker and in faith-inspired reconciliations in Ireland and areas of conflict around the world.

He encouraged the more than 300 participants at the **Mariapolis to forge links between their own churches and those of other denominations in their local area. For example, they could pray for the success of each other’s events, or get involved in joint projects or include intentions for both churches in prayers of the faithful.

There were many present from Northern Ireland at the Mariapolis. Roisin Lynch, a South Antrim SDLP candidate for the Northern Ireland Assembly and Westminster General Election, spoke of how people of faith can be involved in politics. She explained how she would never have left her own sofa and felt she has something to contribute except for her desire to live a life with Christian and gospel values at its centre.

She has found over the years that even those on polar opposite ends of the political divide can work together for the common good.

“I can be a small part in a positive move forward,” she explained.

For example, she is working with the community and local politicians of all persuasions to ensure that the needs of the elderly are being met by providing supported living facilities.

At the Focolare event there was an opportunity to support with prayer the work of peace and community building in Northern Ireland and elsewhere in the world with an Ecumenical Vigil for Peace in St Laurence’s Catholic Church, Ballinroad.

The Mariapolis was held in Dungarvan, Co Waterford, and local Bishop Alphonsus Cullinan, Bishop of Waterford and Lismore, welcomed participants by celebrating Mass at St Mary’s Parish Church on the first morning. Bishop Brendan Leahy DD, Bishop of Limerick was also present and spent some time with the young people answering their questions as well as addressing the adult participants and celebrating Mass on the final morning. 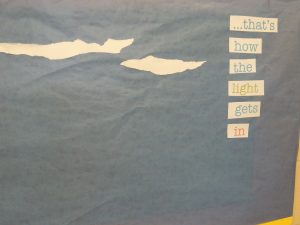 Lorna Gold, who has worked as Head of Policy and Advocacy with Trócaire, spoke on the theme of the event, ‘That’s How the Light Gets In’.

Sarah and Declan O’Brien spoke about the World Meeting of Families 2018 and a special resource by Focolare to help families prepare. The Family Cube incorporates six gospel based phrases based on The Art of Loving by Chiara Lubich and Amoris Laetitia (The Joy of Love) by Pope Francis.

Family members of all ages can roll the cube every morning and try to put the gospel based phrase into practice for the day. They then share about how they got on at the next family meal time or in the evening.

There was a multitude of workshops and other events ranging from dance to baking to discussion on spiritual and social justice issues during the four-day event which ran from Thursday to Sunday (5–9 July).

There are plans for a follow-up meeting on Sunday 24 September at the Focolare Centre, Prosperous, Co Kildare.

*Focolare, an Italian word meaning ‘fireside’, is recognised as an ecclesial movement of the Catholic Church. See www.focolare.org/ireland

**Mariapolis is the summer gathering of the Focolare, an international movement which seeks to build a united world taking its inspiration from Jesus’ prayer, “may they all be one” (Jn 17:21).