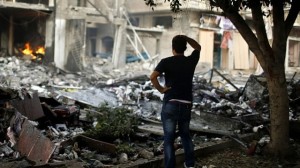 Pax Christi International has decried the new cycle of violence between Israelis and Palestinians following the collapse of the Egyptian-brokered ceasefire.

In a statement on Tuesday, the organisation said, “Tragically, a new escalation of violence has engulfed the daily lives of Israelis and Palestinian civilians.”

It said last month’s abduction and murder of three young Israelis in Hebron and the kidnapping and murder of a 16 year old Palestinian had fuelled this new cycle of violence.

Noting that the UN has warned about the possibility of a full blown war, Pax Christi called on the UN Security Council to “immediately take all necessary measures to end this new cycle of violence in Israel and Palestine and to set directions for new talks toward a just and sustainable peace.”

The group said the US and the EU had a special responsibility on this matter as both have military links with Israel.

A fully implemented embargo on all arms, equipment and training to and from Israel should be enforced immediately, the group urged.

“Once again, Gaza is under relentless, daily attack from the Israeli military system, one of the most sophisticated in the world. Gaza is suffering the death and injury of large numbers of civilian men, women and children and in some cases, whole families,” the statement read.

“The high number of injuries, the destruction of homes, schools and hospitals means that there is a severe humanitarian crisis in the country, which already has a fragile infrastructure.”

“Armed militants in Gaza are firing rockets as far as they can into Israel but to date there have been no fatalities. All those involved in indiscriminate acts of violence against civilians should be brought to account.”

“Palestinian armed groups have set terms for a cease fire but the prospects for an immediate Israeli pullback seem remote.”

“A recent cease-fire proposed by Egypt also failed. Many in positions of power and political leadership remain entrenched, not only unwilling to enter into any real and meaningful process of dialogue but also pouring oil on the fire with words and acts that nurture the conflict.”

Pax Christi said it cries out for an end to this new cycle of violence, believing that its roots are firmly planted in the persistent structural violence of Israel’s occupation of Palestine.

It added that both Palestinians and Israelis have a fundamental right to live in security and without fear, but true security will not be guaranteed for either until the occupation ends and each recognizes the human dignity of the other.

“While the need for a negotiated solution to the long and violent conflict between Israel and Palestine is clear, little progress has been made to date. Renewed dialogue is essential.”

Pax Christi International said it believed that the reconciliation of Hamas and Fatah is an important step toward a negotiated solution, bringing Hamas into a legitimate political process that could lead it to abandon its armed struggle.

Recalling the invocation for peace in Israel and Palestine, held in the Vatican on 8 June 2014, the Catholic peace group cited Pope Francis’s words “Peace-making calls for courage, much more so than warfare.”

“It calls for the courage to say yes to encounter and no to conflict: yes to dialogue and no to violence; yes to negotiations and no to hostilities; yes to respect for agreements and no to acts of provocation; yes to sincerity and no to duplicity. All of this takes courage, it takes strength and tenacity”.

Such courage, strength and tenacity were shown by the families of the dead Israeli and Palestinian teenagers who have called for calm and reconciliation, Pax Christi said.

It said its members around the world offer their sincere condolences to all those in mourning and pray that those who have been killed recently will be the last to die violent deaths in this escalation of hatred and vengeance.

“We stand in solidarity with our member organisations in Palestine and with peace and human rights activists in Israel and Palestine. We are convinced that voices for a just peace in the region will not be silent.”