Paul VI to be made a saint following approval of miracle 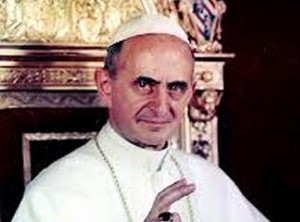 The Congregation for the Causes of Saints has approved a second miracle attributed to the intercession of Blessed Paul VI, paving the way for his canonisation.

According to Vatican Insider’s Andrea Tornielli, the miracle must now be approved by Pope Francis, who will issue an official decree and then a date can be set for the canonisation ceremony.

The miracle relates to the healing, attributed to the intercession of Blessed Paul VI, of a baby in the womb.

Though details remain sketchy, it appears the expectant mother from Verona was experiencing a difficult pregnancy and in the fifth month was told she risked losing the baby due to a disease which also threatened her own health.

A few days after Pope Paul’s beatification on Sunday 19 October 2014, the woman went to Brescia to pray for the intercession of the new Blessed at the Santuario delle Grazie.

According to Vatican watcher Andrea Tornielli, Pope Francis will announce the date of Blessed Paul VI’s canonisation during the next consistory. The canonisation may take place in Rome in October, during the Synod bishops on young people.

Pope Paul VI was born Giovanni Battista Enrico Antonio Maria Montini in September 1897. His father Giorgio Montini, was a lawyer, journalist, director of the Catholic Action and member of the Italian Parliament. His mother was Giudetta Alghisi, from a family of rural nobility. He had two brothers, Francesco Montini, who became a physician, and Lodovico Montini, who became a lawyer and politician.

Upon his election to the papacy, he took the name Paul VI and re-convened the Second Vatican Council, which had automatically closed with the death of John XXIII.

Paul VI did away with much of the regal splendour of the papacy. He was the last pope to be crowned and he donated his tiara, a gift from his former Archdiocese of Milan, to the Basilica of the National Shrine of the Immaculate Conception in Washington, DC as a gift to American Catholics.

After the Second Vatican Council had concluded its work, Paul VI took charge of the interpretation and implementation of its mandates.

He was the first pope to visit six continents and travelled more widely than any of his predecessors, earning the title ‘the Pilgrim Pope’. He visited the Holy Land in 1964 and participated in Eucharistic Congresses in Bombay, India and Bogotá, Colombia. In 1966, he was twice denied permission to visit Poland by the Communist authorities for the 1,000th anniversary of the introduction of Christianity in Poland.

In 1967, he visited the shrine of Our Lady of Fátima in Portugal on the fiftieth anniversary of the apparitions there. He undertook a pastoral visit to Uganda in 1969, becoming the first pope in modern times to visit Africa.

On 27 November 1970 he was the target of an assassination attempt at Manila International Airport in the Philippines and was lightly stabbed in the attack. Pope Paul VI addressed the United Nations in New York City in October 1965, appealing for peace as the US involvement in the Vietnam War was escalating.

One of his best-known encyclicals is Populorum Progressio, which was released on 26 March 1967. It focuses on the development of peoples and how the economy should serve mankind and not just the few.

It deals with a number aspects of Catholic Social Teaching including the right to a just wage; the right to security of employment; the right to fair and reasonable working conditions; the right to join a union and strike as a last resort; and the universal destination of resources and goods. Populorum progressio argued that real peace in the world is conditional on justice.

In all, Pope Paul VI issued eight encyclicals. The most contentious was Humanae Vitae (Of Human Life, subtitled On the Regulation of Birth), which was published on 25 July 1968. In this encyclical he reaffirmed the Catholic Church’s traditional view of marriage and marital relations and its continued prohibition on artificial birth control. It remains highly contentious to this day, with most catholic couples privately choosing to ignore the prohibition, though not publicly admitting so.