Patriarch urges ‘culture of life’ in face of violence 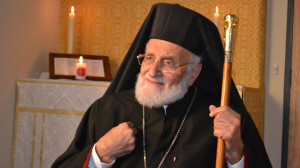 His Beatitude Patriarch Gregorios III has urged the people of his Church to be “agents to build up the culture of life and not be instruments of death.”

Speaking of war and persecution in some of the most troubled places in the world including Iraq and Syria, the Melkite Greek Catholic Patriarch of Antioch and All the East said, “Human beings have been instrumentalised and commoditised. Religious conflict has become marketable.”

He added that “Killing the innocent has become a commodity and instrument and slaughtering Christians has become a tool.”

In his Easter message he spoke of the many parishioners and other citizens who have fallen as martyrs and victims of “savage” warfare.

Three groups of events that have really shaken them and destroyed morale he said and this has caused fear and mass emigration because of fear and lack of security.

He spoke of those in Mosul and on the Nineveh Plain who have been driven out; secondly of Daesh (ISIS) who have slaughtered 21 Egyptian citizens and Copts, and thirdly the expulsion, killing and kidnapping of many of Assyrians of 35 villages along the Khabur River in Northern Syria.

“We offer our heartfelt condolences to all those who are grieving. We shall remain always trusting in the Lord and Saviour Jesus Christ, risen from the dead, who has destroyed death,” he said.

He went on to insist that any idea that the conflict is over religion should be dismissed. ISIS has nothing to do with religion.

“ISIS is rather an instrument which takes on, very foolishly and insolently, the outward aspect and show of a religious movement. However, in reality they show Islam in a most hideous, deceitful and fraudulent guise,” he said.

Referring to Pope Francis’ New Year’s Day letter for the World Day of Peace (2015) and his Lenten Letter, in which he draws attention to the fact that humans should not be used, the Patriarch said: “I say with great certainty and with great pain that religion has become a tool; human beings have been instrumentalised and commoditised. Religious conflict has become marketable. Killing the innocent has become a commodity and instrument and slaughtering Christians has become a tool.”

This is true of the Syrian crisis and that many profit from it.

“We wonder whether something of Daesh (ISIS) ideology has not found its way into every human being nowadays,” he said.

But he added that everyone will rejoice when all the fighters in Syria discard their weapons and “walk all together in the light of resurrection and life.”

He urged people to be “agents to build up the culture of life and not be instruments of death, war and destruction. That is the meaning of life: that is its beauty.”