Home > News > Patriarch to protest against Islamisation of minors

Patriarch to protest against Islamisation of minors 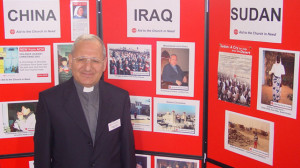 Under new legislation, children in Iraq will be automatically registered as Muslim when they are born.

Chaldean Patriarch Raphael I Louis Sako has called for a demonstration to protest against the law which is being described as ‘the Islamisation of minors’.

Campaigners will gather today Tuesday, 10 November, in front of the Chaldean Church of St George in Baghdad to protest.

In addition to Christians from different denominations, the protest will be attended will be attended by groups belonging to the religious communities of the Yazidis, Mandaeans and Sabean, political activists and representatives of civil society organisations.

In a statement, released by the Chaldean Patriarchate, Patriarch Raphael I Louis reiterates that the law on the Islamisation of minors represents a violation for the unity among the different components of the Iraqi people.

The Primate of the Chaldean Church points out that such a legal provision violates articles of the Iraqi constitution that protects citizens from discrimination, and also contradicts the teachings of the Koran, which says that there can be no pressure in religion.

The Patriarch also appeals to Iraqi President Fuad Masum for the law to be amended in parliament so that those aspects of it which make it discriminatory are corrected.

Otherwise, warns the Chaldean Patriarch, an appeal to the courts and international bodies that protect human rights will be expedited.

On 27 October, the Iraqi Parliament rejected a proposal, made by Christian representatives, but supported by parliamentarians belonging to different alliances, to amend the law according to which a child is automatically registered as a Muslim, even if only one parent converts to Islam.

The proposal requested the addition of a sentence in the section dealing with minors, that children remain in the religion of their family until they reach eighteen years of age, and then freely choose the religion they want.