Home > Featured > Ozone layer around the earth shows some recovery

Ozone layer around the earth shows some recovery 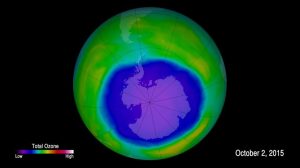 Scientists have confirmed that the ozone hole over the Antarctic is shrinking and appears to be healing.

Research carried out by an international team from the Massachusetts Institute of Technology and the University of Leeds shows that the average size of the ozone hole each September has shrunk by more than 1.7 million square miles since 2000.

The team believes that part of this improvement is due to the ban of the use of chlorofluorocarbons (CFCs) brought about in 1987 by the Montreal Protocol.

At the time CFCs were widely used in cooling appliances and aerosol cans.

Speaking to RTE Radio 1, Professor Ryan Neely from the University of Leeds said that if the ‘healing’ continues, the hole might close completely by the middle of this century.

“We are on the path to healing and we keep monitoring it.” Research indicated that by the middle of the century the ozone hole would heal completely.

“That could be as early as 2040 or as late as 2070 but in the middle of the century we should have a complete ozone layer again,” he said.

Last month at a conference marking the first anniversary of Pope Francis encyclical on the environment, Laudato Si, Dr Lorna Gold said that the Pope’s powerful document had resonated “outside the Catholic Church more than within”.

“People on the outside have seen the potential of Laudato Si to galvanise public opinion,” she told a seminar at Loyola Institute in Trinity College Dublin  on Caring for our Common Home.

Dr Gold, who is Head of Policy and Advocacy with Trócaire, said that finding policy changes (like the smoking ban or drink driving laws) which are “incremental but transformative” is really key.

The role of faith communities and educational institutions in offering a different perspective, was “absolutely critical” she said. “It is a long term goal and the road ahead indicated by Pope Francis is arduous.”

Through his encyclical Laudato Si, Pope Francis had given life to a “burgeoning global Catholic climate movement,” said Dr Gold.

In Ireland the Catholic Bishops have set up a working group that is examining how to role out the implications of Laudato Si across the Church in Ireland, which Dr Gold said was a “positive sign”.

The cultural renewal around climate change had to come from the grassroots she said.

But well known architect and environmentalist, Duncan Stewart, says that while Laudato Si is a “beacon of where we are going,” there is a disconnect between the Pope’s words and what was happening at the ground level in parishes and dioceses.

“I feel the potential in what the Pope is saying, and it is an encyclical, but it doesn’t seem to be getting through,” he told CatholicIreland.net.

“We need this to get down to every local community and to every parish and we need ordinary people to be engaged in this because it covers all the issues that matter to us but there is a massive disconnect.”