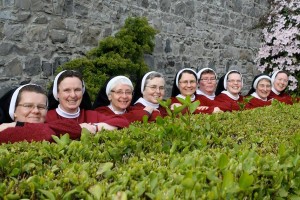 The ‘high tech prioress’ was how Pat Kenny described Sr Gabrielle when he visited the Monastery of St Alphonsus in Dublin.

His interview with Sr Gabrielle and other enclosed Redemptoristine Sisters was broadcast on Newstalk on Christmas day and is available to playback via a link on the Sisters’ website.

IN the programme, Sr Gabrielle emphasised the importance of prayer but also how the internet, email and webcam has influenced they way they pray.

“First of all our life is based totally on a life prayer. We come together seven times a day to pray together, for the needs of the Church, for all who are suffering, and the needs of the world,” she said.

“We are on the webcam day and night and it is wonderful to see the numbers of people that join us live, and those that email as well. So it keeps us very much in tune with what is happening in society and the suffering people go through.” 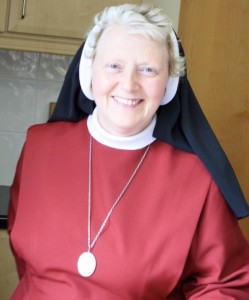 She described the internet as one of the gifts from God.

“These gifts have been developed by the intelligence of human people and we use them in a good way. We don’t exploit them and we are not exploited by them. We use them at the service of the good, for spreading God’s word really.”

The Redemptoristines have their own website which connects with a camera (webcam) in the chapel and allows people to visit and pray with the Sisters via the internet.

They also have email, a blog and facebook page. The Sisters also can have their own individual facebook accounts to stay in touch with their friends and family.

Sr Marie, a young Slovakian Sister, spoke of staying in touch with her family via Skype.

Some of the younger Sisters spoke of what brought them to the enclosed monastery.

Sr Maura had spent some time in England during the punk era and had arrived home with a nose stud, some time before joining the Sisters.

Sr Margaret, who is of a different generation, spoke of the work of producing altar breads and how demand increased hugely before Christmas.

“For the last week we were just running to keep up with the orders. We had a lot of double orders and priests getting back to us for more. We hear that so many are not going to mass any more, but they are,” she said. 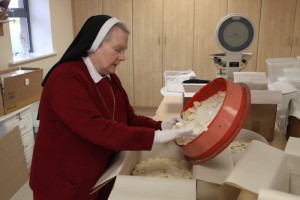 As well as making altar breads, the Sisters do other work such as candle making, which involves creating bespoke candles for unique occasions such as baptisms and marriages.

In the Radio documentary, Pat Kenny also toured the monastery which was refurbished to better meet the needs of the enclosed order.

When work began in 2000 there was a need to cater for more elderly Sisters.

However, during the last decade several young people have joined the order. There are now 16 in the community ranging in ages from the twenties to beyond the seventies.

The chapel is now more contemporary and members of the public are welcome to attend for prayers and Eucharist.

The radio interview which aired on Newstalk Radio on Christmas Day can be accessed via the nun’s website: www.rednuns.com