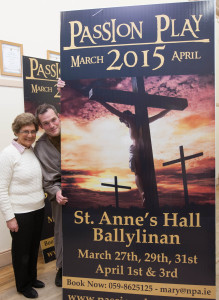 The Oberammergau Passion Play returns for a sixth time to the rural Laois town of Ballylinan.

The people of this and nearby towns and environs have performed an English language version of the play once every five years since 1992.

“It is hard to say no to it, because of what it is. It is one of those things that makes you feel better and that you’ve done something good if you take part in it,” Anna Marie McHugh, PRO, told CatholicIreland.net.

It has attracted the attention of the national media each year.

This year there is a cast of 120-130 and as many more again preparing sets, costumes and doing all the background tasks.

“This year more than half the cast are under 40, which is fantastic in these times. They thoroughly enjoy it, while there is a lot of respect given to the story of the passion play at the same time,” said Anna Marie McHugh.

She explained that in acting out the striking events of the bible story, and speaking the words of Christ and the disciples emphasise their meaning all the more.

“The phrases of impact in the play are very real to people as they are saying them,” she explained.

The play is performed and prepared by amateurs ranging from farmers to teachers, health workers, students, an accountant and army officer.

Even the local schools prepare the children for their part in crowd scenes at the beginning of the play. Those involved are of various denominations including Catholic, Church of Ireland and Presbyterian and no faith.

“It is amazing the boundaries that it crosses over and it just has a way of bringing people together,” said Anna Marie McHugh. 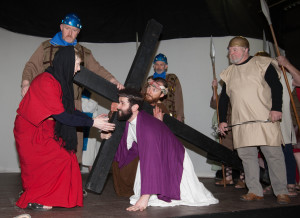 The dedicated cast have been rehearsing since before Christmas. Many are new to the play while others who have done it before are taking more challenging parts.

Then some want to take a step back and have a role with less lines. This year the actors playing Christ are new.

It begins with the triumphant entry into Jerusalem and concludes with the resurrection.

Many passion plays around the world are performed in churches, this one is in the local hall however this was once the parish church in Ballylinan.

The local Arles, Ballylinan, Killeen Parish area also benefits from the play as some of the cast go to various Easter services in costume.

So the Disciples will be at a local church for the washing of the feet, and on Palm Sunday the congregation will include members of the cast in costume.

People travel from far and wide to the event and the audience includes relations and friends of the cast, clergy, priests, nuns and bishops, and those who like drama and a good production.

One person who had been visiting from Switzerland said it was one of the things they will never forget and a very special memory for them.

“People come to us afterwards and say it’s been one of those special things they’ve been to,” said Anna Marie McHugh. “People have said it is just so real and you can relate to the people in it, that they were very much drawn into it.”

She added that they do not notice that it last three hours.