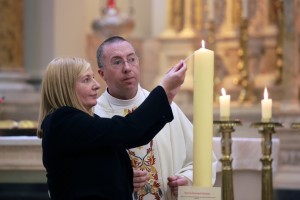 Fr Robert McCabe and Rhona McConnell from Aid to the Church in Need at a Mass in support of Christians in Iraq, at Clarendon street Church in Dublin. Picture: Arthur Carron

One of the organisers of this weekend’s ‘Walk to Church’ initiative has appealed to Irish parishes to get behind the venture and use the resources that have been specially prepared for it.

Co Meath priest, Fr Robert McCabe, said in a statement, “Our brothers and sisters in Iraq and in many other parts of the Middle East are in urgent need of our prayers and solidarity as are the parishes who have provided them with shelter in recent weeks and who are now under pressure with resources.”

He said that schools that closed for their summer holidays in Iraq at the end of June should be opening again this week.

“Tensions in the region have upset not just the school curriculum, the farming community, and the business sector but have damaged the integrity of family life, freedom of religion and the cohesion of village communities.”

Fr Robert added, “I hope the Walk to Church initiative might focus our prayers and generosity on the displaced Christians and persecuted minorities of Iraq and the Middle East.”

“Village populations have fled under threat of forced conversion, unjust taxes or execution. It upsets me deeply that their trauma still has not found an echo in Irish hearts.”

200 years before Patrick came to Ireland, the Christians of Mosul were already gathering in prayer. Now the population has been wiped out, he said.

Some posters have been prepared by Aid to the Church in Need which might help parishes and with this initiative he explained. (They can be obtained at http://acnireland.org/index.php/home/the-crisis/walk-to-church-poster).

Last week, Fr Robert appealed to Catholics in Ireland to walk to Mass on Sunday 31 August as a gesture of solidarity with persecuted Christians.

Hundreds of people attended a Mass in Dublin at Clarendon Street church in Dublin to highlight the plight of over one million Christians displaced in Syria and Iraq.

In his homily, Fr Robert McCabe told the congregation, “We have a duty towards others who are suffering in a culture of death.”

He said he hoped that the ‘Walk to Mass’ would sow the seeds of concern, action and generosity in people’s hearts as they urged their elected representatives to deepen their action on behalf of Iraq’s persecuted on the world stage.

Fr McCabe expressed concern for a Middle East that is being emptied of its ancient Christian communities, many of which dated from the second century.

He said this was happening at the hands of “religious extremism”, a reference to the Islamist IS, which he said was “choking the beauty of friendship and community in different parts of Iraq and other parts of the Middle East.”

“Over the past number of weeks I’ve seen images on television and like many of you here this evening I’ve been asking what can I do to connect with the pain with these innocent and vulnerable people,” he said.

Neighbours of different faiths who had helped build each other’s houses and supported each other in business had all been scattered.

The priest, who was joined by over 12 other clergy in concelebrating the Mass, urged Christians in Ireland to “get moving” and “get speaking” and take the hashtag #PrayForPeace to their hearts in the coming days.

“Let’s appreciate the fact that we can gather safely in prayer this evening and pray that civil, religious and military leaders will work to provide safe lodgings, holy rest and peace at the last for our brothers and sisters who suffer this night, this month, this year.”