Parishes urged to offer shelter to a migrant family

Pope’s appeal for solidarity and welcome is a call for a creative and generous response in preparation for the Jubilee Year of Mercy. 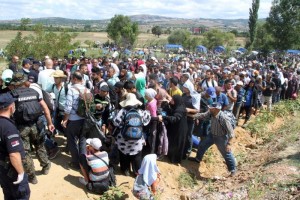 Pope Francis has called on European parishes and religious communities to offer shelter to a migrant family for the Year of Mercy.

In his address to the faithful during Sunday’s Angelus, the Pontiff appealed, “May every parish, every religious community, every monastery, every sanctuary of Europe, take in one family.”

He told the crowds gathered in St Peter’s Square that the faithful are called to offer a concrete gesture of hope as indicated in the Gospel.

The tragedy of tens of thousands of refugees fleeing death in conflict and hunger “calls us to be close to the smallest and to those who have been abandoned”.

Reminding the faithful of the upcoming Jubilee Year of Mercy, the Pope said that offering shelter to the needy is a “concrete act of preparation” for the Holy Year.

He asked the bishops of Europe to support his appeal and said that in the coming days two Vatican parishes would each be taking in a family of refugees.

The two parishes inside the Vatican referred to by the Pope are the Parish of Santa Anna and St Peter’s Basilica.

Vatican spokesman, Fr Frederico Lombardi, told media on Sunday that the two are “extremely different realities” but that each of them would find its own way to respond to the Pope’s call.

Fr Lombardi also underlined that the Pope’s request to all parishes, religious communities, monasteries and sanctuaries to offer shelter to forced migrants and refugees currently in search of refuge, was aimed at the “whole of Europe” and not just a few isolated realities.

The Vatican spokesman said Pope Francis was urging catholic communities to take the lead in “welcoming our refugee and migrant brothers and sisters in a moment in which the gravity of their situation represents the most urgent question currently to be tackled on the continent”.

He highlighted that the Pope’s appeal for solidarity and welcome calls for a creative and generous response in preparation for the Jubilee Year of Mercy, a preparation that must come to life through concrete works of charity.

“He is not,” Fr Lombardi said, “referring to organisational or logistic preparations”.

Explaining the Pope’s reference to “religious communities”, Fr Lombardi said the Pope was using the same strong words he used when visiting the ‘Centro Astalli’ – the Jesuit run refugee Centre in Rome – when he spoke of “empty convents”.

The Pope’s words in that occasion (10 September 2013) were: “The Lord calls us to live with greater courage and generosity hospitality in communities, in houses and in empty convents.”

“Dear men and women religious, your empty convents are not useful to the Church if they are turned into hotels and earn money. The empty convents do not belong to you, they are for the flesh of Christ which is what refugees are.”

“The Lord calls us to live with greater courage and generosity, and to accept them in communities, houses and empty convents. This of course is not something simple; it requires a criterion and responsibility, but also courage. We do a great deal, but perhaps we are called to do more, firmly accepting and sharing with those whom Providence has given us to serve”.