Home > News > Parishes urged to donate blood as a community

Parishes urged to donate blood as a community 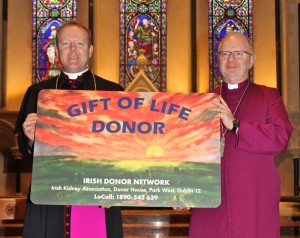 The director of the FleshandBlood campaign has urged parishes across the island of Ireland to get behind their appeal and consider donating blood collectively as a community.

Speaking in St Patrick’s Cathedral in Dublin on Friday, Matt Hollidge said the campaign was delighted to be working with the Christian Churches on promoting organ and blood donations.

He also suggested that parishes might consider volunteering their premises for use in a blood donation drive and in the promotion of information around organ donation.

The FleshandBlood (FaB) campaign aims to mobilise churches to get their parishioners more actively involved in donating blood and organs to help those waiting for a transplant or in need of a blood transfusion.

It is the first cross-border partnership in Ireland between the Churches and the health services.

It was launched in Dublin by the Primate of All Ireland, Archbishop Eamon Martin, and his Church of Ireland counterpart, Archbishop Richard Clarke.

The launch was hosted by the Dean of St Patrick’s Cathedral, the Very Revd Victor Stacey, who explained that he had received a medal some years back in recognition of over 50 donations of blood.

Currently there are 800 people awaiting an organ on the island of Ireland and every year nearly 100,000 transfusions take place.

Over the subsequent fifty years, the lives of those who received an organ had been transformed as well as the families of recipients who would otherwise have died.

He urged people to get involved in the FaB campaign and help the 800 people whose lives are on hold waiting for an organ. “That’s 800 dreams – 800 futures that are uncertain,” he said.

“We can truly make a difference,” he explained in the Lady Chapel of St Patrick’s Cathedral in Dublin.

He explained that he had been moved by the miracle of those individuals who had received a transplant then going on to create new lives themselves after the transplant.

He praised the families of those donors, who in the midst of their great loss and sorrow, were prepared to give the gift of life to as many as five other families.

The FaB campaign, Colin White suggested, was a catalyst to spur on the conversation about organ donation and maybe prompt people to make a commitment.

Stephen Cousins, National Donor Services Manager with the Irish Blood Transfusion Service, told the launch in the Lady Chapel of St Patrick’s Cathedral that across the island some 28,000 extra donors are needed annually. 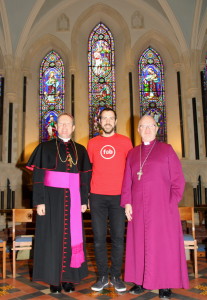 While one in four of us will require a blood transfusion in our lifetime, only 3-4% of the eligible population are actually active donors.

“That’s a lot of people relying on a very few,” he said. “It’s a challenge to maintain blood supplies and the donor base.”

“Hospitals don’t stop and the need for blood for patients doesn’t stop.”

He also explained that blood cannot be frozen and so the blood collected must be used within 35 days.

In his address, Mr Cousins said he felt it was appropriate that the launch was taking place in St Patrick’s Cathedral given its connection with the ‘Door of Reconciliation’ on display in the church.

It was used by the Earl of Kildare in 1492 when he stuck his arm through a hole in the door in a gesture of friendship and trust to his rivals the Butlers of Ormonde.

“Thankfully for the Earl he became the world’s first deferred donor”.

He concluded his address by stating that the Irish Blood Transfusion Service was “delighted to receive the support of the Churches in educating people about the constant need for blood donation and for promoting the IBTS’ clinics in the local communities.”

Archbishop Martin said he had been a blood donor since his last year in secondary school but had only become an organ donor since before Christmas when Archbishop Clarke informed him about the FaB campaign which was launched originally in Britain.

Archbishop Clarke said he had become aware of the need for blood donations when his wife miscarried on their first child when they were living in Wales and later when she was in need of blood transfusions as part of her treatment for terminal cancer.

Colin Clare who has twice been the recipient of an organ, outlined his experience of renal failure causing him to need a replacement kidney, which he received in 1991 and again in 2012. 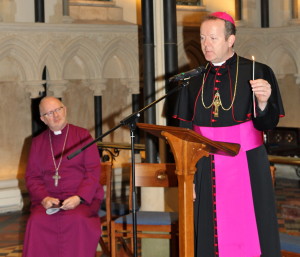 Friday’s launch marks the culmination of a week of activity for the campaign which aims to mobilise churches to increase the number of blood and organ donors throughout the island.

It was launched in Northern Ireland on Monday and is the first cross border partnership between churches and health services.

FleshandBlood will see congregations and parishes being encouraged to see blood and organ donation as part of their giving, which Archbishop Clarke urged the faithful to see from the perspective of Christian discipleship and seeing life as a gift.

At the end of Friday’s launch, Archbishop Martin prayed for those involved in the campaign, and lit a candle in memory of all those who have given blood and organs down the years. He prayed for one of his own colleagues who has just become a live donor for his brother.