Parents plead for support for life-saving treatment for their son 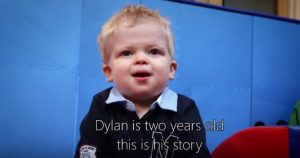 The parents of a four-year-old boy from Dublin who has a rare and devastating illness which is threatening his life have appealed to parishes to support their fundraising concert this weekend.

Dylan is just one of 45 known cases of the condition in the world and, while a cure exists which could save his life, money is needed to produce the drugs and pay for a clinical trial. Otherwise Dylan’s prognosis is not good, and time is running out.

According to Michelle, “If the money isn’t raised on time, he will go through a lot of pain and suffering. He will lose the ability to sit and stand on his own, he will no longer be able to feed himself and will have to be fed through a tube and all his bodily functions will start to shut down. He will eventually die.”

Doctors have told Alan and Michelle that without treatment, Dylan won’t live beyond his tenth birthday.

The couple need €2 million to fund the clinical trials and so far they have already managed to raise €638,710.

“We need help – money is the biggest obstacle to giving Dylan a chance of life,” Alan Finglas said.

Speaking to Catholicireland.net, Alan explained, “Sadly, Dylan’s condition is progressing but we still have huge hope and continue to pray for a therapy to be delivered that could give him and other patients suffering from the same condition the best possible quality of life.

“We anticipate that the research that will be initiated as a result of the generosity and support from our kind supporters will deliver a life-changing therapy. We expect to initiate research projects on Multiple Sulfatase Deficiency (MSD) before September this year. Currently we do not have enough funds to progress with all the best projects.”

The couple have received no funding from the State; nor have they received any national lottery funds, despite their ongoing efforts to apply for them. 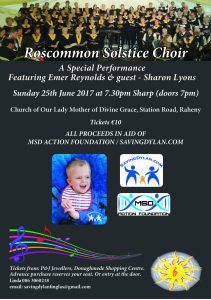 “We went to Lourdes as part of a parish group trip in Holy Trinity Parish Donaghmede in Dublin 13. I remember distinctly Sr Margaret, who travelled with the parish group, saying to me early on the pilgrimage that I should pray for strength and healing and not necessarily for a miracle, as everyone wants a miracle and this is simply not possible.

“I do believe that we have been given the strength to deal with the situation as best we can. A cure/treatment for this clinically devastating condition is possible and we will never give up in our endeavours!”

Next Sunday (25 June), the acclaimed 120-strong Roscommon Solstice Choir will perform at the Church of Our Lady Mother of Divine Grace in Raheny in Dublin with Emer Reynolds and guest soprano Sharon Lyons.

The concert aims to raise funds for Dylan.

The choir has raised several hundred thousand euro for charities all over Ireland and has even been featured on BBC in the UK.

According to Alan, one of the choir members met his wife Michelle and Dylan on a trip to Lourdes and agreed to help create an event in aid of a charity the Finglas family founded called MSD Action Foundation/SavingDylan.com.

Soprano Sharon Lyons from Howth holds a PhD in Music and is the lead soloist on the official track for WMOF2018 in Ireland. See the track here: https://www.youtube.com/watch?v=APiQ0KM2PqQ.

Speaking about his son, Alan explained, “There’s not five minutes that go by when I don’t think about this death sentence hanging over Dylan’s head. Please help us spread the word. I don’t want to have to say goodbye to my little boy.”

To support Alan and Michelle Finglas’ fundraising efforts for their son Dylan, see: https://www.facebook.com/SavingDylanFinglas/ and http://www.savingdylan.com/.