Parents and former students battle to save Cistercian College Roscrea 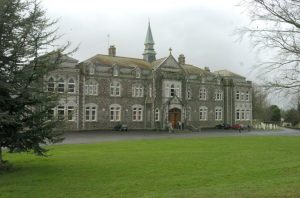 mer students of Cistercian College in Roscrea (CCR) on the Tipperary/Offaly border have mounted a major campaign to save the famous secondary school from closure.

Last weekend, it was announced that the 112-year-old college, which is under the trusteeship of the Cistercian Order, was closing due to falling numbers.

However, a meeting of past students held in the County Arms Hotel in Birr on Wednesday 22 February heard that no effort will be spared to save the historic college, which counts former Taoiseach Brian Cowen and former Tánaiste Dick Spring amongst its illustrious alumni.

The Save CCR campaign meeting in Birr, which was attended by over 300 people, heard that the college had a running cost shortfall of €200,000 per annum, which could worsen in the 2017/2018 academic year. The main reasons for the decision to close the college were its financial viability and the broader issues of the changing nature of Irish society and education.

Currently, the college has a total enrolment of 167 pupils, with only 9 new first years booked in for next year. The meeting was also told that the college had capacity numbers for many years up to 2010. In 2009/2010 the trustees of the school – the monks of Mount St Joseph Abbey – had started to subsidise the financial shortfall at the college. They sold a farm and put extra resources into the college. The meeting was told that the current cost of running the college, excluding capital expenditure and investment, is €2.4m per annum.

Ronnie Culliton, a past pupil who has sons in the school, challenged those in attendance as to what kind of money would be available to any new project for the school, asking people to consider what they would be willing to contribute. “Let’s see what we can commit to,” he said.

Current Connacht rugby player Sean O’Brien, who completed his education at the college in 2013, also spoke at the meeting. He said that CCR “provides an unbelievable educational and sporting platform. It’s worth even more than that as it creates an unbelievable bond among students which you would not have in a day school. I know that many of the past pupils of this school are willing to fight for its future.”

Meanwhile, in a letter sent to parents on Friday 24 February, Dom Richard Purcell welcomed “the many heart-warming expressions of support for Cistercian College Roscrea and the monastic community of Mount St Joseph Abbey on foot of last Friday’s closure announcement by the Trustees”.

Furthermore, he added, “In recognition of this no further action will be taken prior to 17 March pending engagement with the group to be formed from among parents and past pupils to explore possible viable proposals for the future of the college. While I do not wish to give any false hope I have committed to give full consideration to any future viable proposals, should one emanate from any such discussions.”