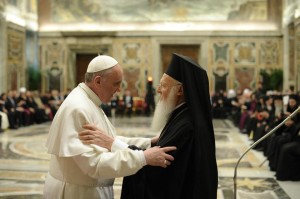 The Ecumenical Patriarch of Constantinople has said a joint statement he will issue with Pope Francis at the close of the Pontiff’s visit to Turkey at the end of the month will be “an important milestone” in ecumenical relations.

The Orthodox Patriarch, Bartholomew I, who is based in Istanbul, told Austrian media that the Pope’s visit, which coincides with the Church in Constantinople’s celebration of its patronal feast of St Andrew, will be “an important sign of solidarity” between the Catholic and Orthodox Churches.

Pope Francis is due to travel to Turkey on an apostolic visit from 28-30 November.

In a total population of over 76 million, Catholics number some 53,000 people and comprise just 0.07% of the overall Turkish population.

There are six bishops, 58 priests, seven men religious and 54 women religious, and two permanent deacons in 54 parishes as well as four seminarians in Turkey.

Pope Emeritus Benedict XVI visited the country in 2006 from 28 November to 01 December. At the time, the Catholic population totalled just 32,000 across 47 parishes.

Reports suggest that the Christian population has risen somewhat in the last couple of years with the influx of refugees fleeing ISIS in Iraq and the violence in Syria.

Speaking to media, the Ecumenical Patriarch said that a restoration of Christian unity “cannot happen overnight” but both Catholic and Orthodox leaders are working to strengthen ties.