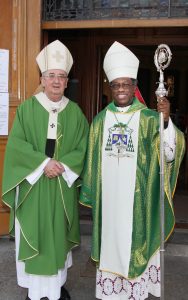 The crest of Pope Francis’ new representative in Ireland honours the contribution of the Irish missionary movement to Africa, members of the diplomatic corps, Irish missionaries and the faithful were told on Sunday.

In his address to the congregation, the new Nuncio explained that when he was made a bishop, he chose as his motto ‘Domine ut Videam’, the Latin for ‘Lord, that I may see’, which was the motto of Bishop Joseph Shanahan, an Irish missionary priest who served as a bishop in Nigeria.

“He was a great man and I am happy to be associated with him,” he commented during his homily on Sunday. He also told the congregation, “I am here to give my best to Ireland.”

Born in 1871 in Borrisoleigh, Co. Tipperary, Bishop Shanahan joined the Spiritans and later helped found the Kiltegan missionary order of priests in 1920 to serve in Africa.

In 1924 he founded the Missionary Sisters of the Holy Rosary in Killeshandra, Co. Cavan.

Always regarded as a saint, Bishop Shanahan’s cause for canonisation was officially opened in the Archdiocese of Onitsha, Nigeria in 1997.

Speaking after Sunday’s ceremony at St Mary’s Pro Cathedral, Archbishop Okolo recalled how his father had acted as a translator for Irish SMA and Kiltegan missionaries, who were heavily involved in education in his native city of Kano in Nigeria.

He himself served as an altar boy for Kiltegan missionary Fr Patrick O’Donoghue, while Irish St Louis nuns ran a school for girls.

The Archbishop arrived in Ireland in August and said his impressions of the country so far “have all been positive; people are very welcoming. I have visited many places in the provinces and the welcome has been very warm and sincere.”

He said Pope Francis wanted his nuncios to be simple and very committed and “to be able to soil our hands in the earth and work on the farm, if it is possible, and to be able to plant our gardens and leave our offices and visit the people.”

He told Catholicireland.net after Mass that the Pope also wanted nuncios to “stretch out the hand of mercy to those who are in pain”.

He added that Pope Francis was “very positive” about Ireland. “I believe and I hope he will come.”

Archbishop Okolo formerly served as an apostolic nuncio to the Central African Republic and Chad in 2008, and then as the Pope’s diplomatic representative to the Dominican Republic in 2013.

Before becoming an apostolic nuncio, he had worked in the diplomatic service of the Holy See, where he was stationed in Sri Lanka, before going on to be a pontifical representative in Haiti, Switzerland, the Czech Republic, Australia and the Antilles.