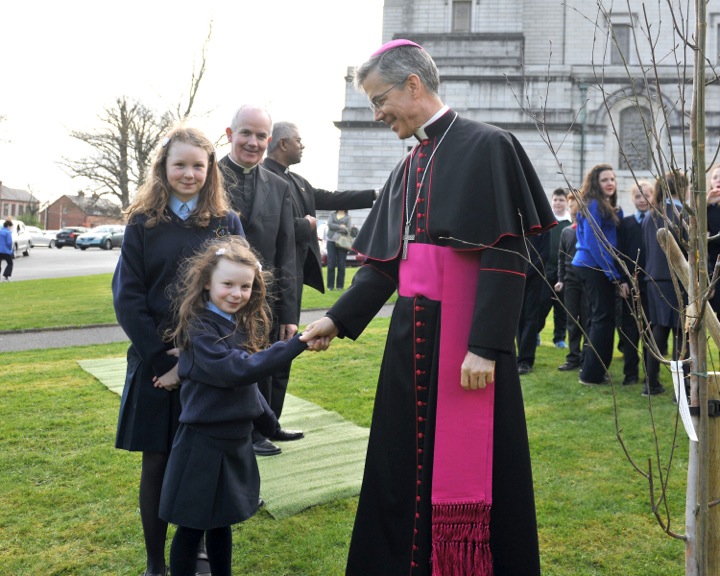 Bishop Michael Smith of Meath made a special presentation to the Papal Nuncio, Archbishop Charles Brown, on Wednesday to mark the 25th anniversary of his ordination to the priesthood.

Before the final blessing at the Chrism Mass in Christ the King Cathedral, Mullingar, Bishop Smith addressed the congregation as he made a presentation to Archbishop Brown.

“I am delighted to welcome the Apostolic Nuncio to the Chrism Mass on this occasion as we mark the 75th anniversary of the consecration of this Cathedral of Christ the King, Mullingar,” Bishop Smith said.

Noting that during the Chrism Mass, the renewal of priestly vows is a central element of the celebration, Bishop Smith continued, “Twenty-five years ago, the young Fr Charles Brown was ordained and, for his first appointment, he was assigned by Cardinal O’Connor to the Parish of St Brendan the Navigator in the Bronx, in the Archdiocese of New York.”

“The Cardinal may or may not have been aware of how providential that appointment, with the example of St Brendan, would turn out to be. The very essence of St Brendan’s mission was reaching out to other shores, which tradition tells us may have included your own native shores in America.”

“For 25 years, first as an assistant pastor, then as a student, later as a Vatican official and now as Archbishop and Nuncio, Your Excellency has sailed to many shores in service of the Gospel.” Bishop Smith observed.

“This evening, we thank Your Excellency for your faithful ministry. I am delighted to present you with this sculpture by Mullingar Pewter of St Brendan the Navigator and, with it, we offer you our prayers that, in your service to the Holy Father, you may continue to reach out to humanity and offer to all people ‘the joy of the Gospel’.”

In his homily, Archbishop Brown reflected on the significance of Chrism and expressed gratitude for the gift of priesthood and the men who have been called by Christ to serve the Church as priests.

“At times, it is not easy for them. And so, for your witness of faithfulness, you, the priests … have our sincere gratitude” the Nuncio said.

He said this is what it means to be a Christian: “to spread the fragrance of Christ, symbolised by the fragrance of the Chrism with which we have been anointed; by the way we live, by the choices we make, by our courage in professing our faith, by our love for others, by our forgiveness of injuries.” 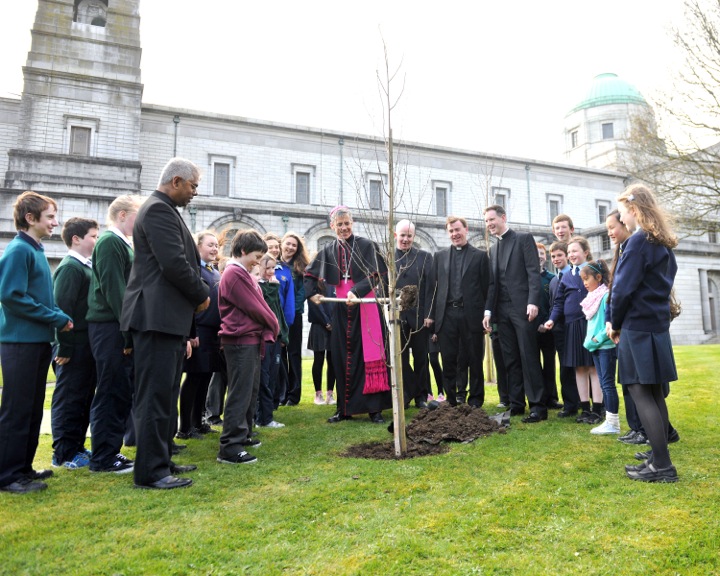 The Archbishop explained that Mother Teresa of Kolkata’s Sisters “who have been such an influence on me in my priesthood, pray every morning after receiving Holy Communion in the following words: ‘Dear Jesus, help us to spread your fragrance everywhere we go. Flood our souls with your spirit and life.”

“Penetrate and possess our whole being so utterly, that our lives may only be a radiance of yours. Shine through us, and be so in us, that every person we come in contact with may feel your presence in our soul.”

“Let us preach you without preaching: not by words, but by our example, by the catching force, the sympathetic influence of what we do, the evident fullness of the love our hearts bear for you”.

Referring to the 75th anniversary of the completion of Mullingar cathedral this year, the Nuncio recalled the historical context of that day in 1939.

“Two days earlier, Germany had invaded Poland. The Second World War had begun; in fact, it was on the day of the consecration of the Cathedral that France and Great Britain declared war on Germany.”

“We can only imagine both the joy of the people of the Diocese of Meath on the completion of their Cathedral, but at the same time surely the fear and uncertainty about the future which was so powerfully present in those days of September 1939.”

Noting that the Diocese of Meath is well known for the presence of a good number of young priests, Archbishop Brown urged the faithful to pray for vocations to the priesthood, and not only to pray, but also to ask.

“Do you know a man who would make a good priest? Tell him that. Encourage him to think about the priesthood. Your voice, your suggestion, could well be the way in which Christ will speak to his heart and say ‘Come, follow me’ (Mt 4:19).”

He also urged to seek the intercession of Mary, the Virgin Mother of God, to watch over the Church and the diocese of Meath and to inspire young men to respond with the generosity of heart”.