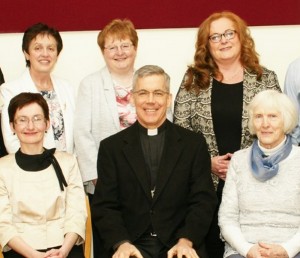 “Prayers and adoration nourish our faith – the synergy of the two.”

Archbishop Brown, who is well known for his interest in promoting a better understanding of faith especially through the study of the Catechism, came to the group at the invitation of its facilitator, Alice O’Connor who had written to him earlier in the year, voicing her concern over the ‘domestic church’.

There is a new curriculum for religion in primary schools, but she felt parents needed to be taught the faith too.

“Parents are the first educators but they don’t have the vocabulary, the knowledge to instill faith in their children  They have to be helped to teach,” she told CatholicIreland.

The letter to Archbishop Brown was the beginning of a correspondence between them, and the married mother of three, invited the Nuncio to meet the Prosperous Adult Catechism Group which has been running for six years.

Having obtained the permission of Bishop Nulty, Archbishop Brown readily agreed to visit them.

“I think it was his first time to visit a small catechism group,” commented one member, Bríd Ni Rinn.

Fr Bill Kemmy, curate from Prosperous, was also present. The Nuncio arrived carrying his catechism, saying “I want to be part of the normal weekly meeting.”

The group studied part of the section of the Catechism of the Catholic Church (CCC) on the ‘Our Father’.

In a spontaneous sharing, Archbishop Brown spoke of the importance of developing faith and studying faith which he compared to a ‘transfiguration’.

“As faith grows, our vision of Christ transforms us,” he said. He noted that in Islam there are very many different names for God, but none of them call God ‘Father’.

At the end of the ‘sample class’, Fr Ed Moore warmly thanked the Archbishop saying it was a privilege to have a person who actually worked on the revised version of the CCC, (along with other brilliant scholars like Pope Benedict XVI), present at their class. 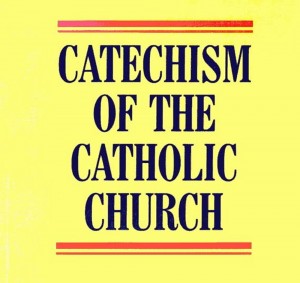 The archbishop said he really enjoyed the time spent with the group. “I’d love to be in a group like this,” he is reported as saying.

“It was a joyful, wonderful, and prayerful night,” commented Bríd Ni Rinn.

Alice O’Connor said the visit of the Nuncio was a real affirmation for the work they have been doing in adult faith development for many years.

“I learnt so much. In a short space of time I got to ask him everything I wanted. He brought a lot of peace.”

Fr Ed Moore told CatholicIreland.net that the Nuncio’s comments “gave insight into a man who is bright, spiritual and focused on the heart of the Church”.

As a recent initiative, the parish has begun a monthly ‘Youcat Bookclub’ which runs on the second Saturday of every month from 11am to 12pm.

The Bookclub and Catechism course are always open to new members and anyone interested may email Prosperous parish office at: [email protected]