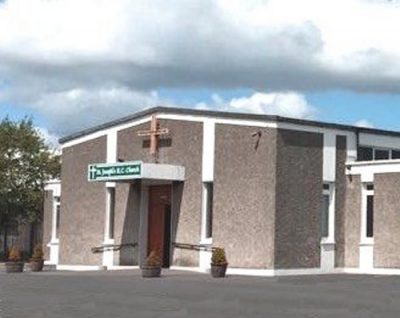 The altar used by Pope Francis when he celebrated Mass in the Phoenix Park in Dublin has found a permanent home in the north Dublin parish of Bonnybrook.

This weekend parishioners were able to worship at the papal altar when their newly refurbished parish church reopened following five months of renovations.

Last night (Saturday 9 March), the Archbishop of Dublin, Dr Diarmuid Martin, joined the parish for a celebration marking the re-opening of the church, St Joseph the artisan, entitled ‘New Beginnings’.

“‘New beginnings’ in parish life is about mirroring that loving care of Jesus and witnessing it in our community,” said Archbishop Martin in his homily. “You can never be just an individualist Christian. Believing Christians belong to a community, a special community forged by the celebration of the Eucharist, the Mystery of faith and of God’s love.”

It would be amiss for me not to recall that this parish has had its dark moments by the failures of the Church in dealing with the abuse of young people by clergy, continued Dr Martin. “What saddens me most is how Church leadership failed, where families who suffered abuse pointed to the right response. They simply asked that no other family or child would have to undergo what happened in their family. They were not heard. We can never bury that hurt.”

‘New beginnings’ means renewed community, he said. “The parish can be a place where strong community addresses the challenges and the hurts of today, especially of young people.” Noting the numbers of young people who died through drug-related causes, he said the community had to “save” young people from a drug culture “by providing them with opportunities. We have to reach out to young people when they fall and not allow them to be trapped forever.”

We have as a community to show that we reject violent attempts to impose drug rule, he said. “Just as Jesus rejected the lifestyle of the despots and dictators, the corrupt and the unscrupulous of his time, we have to say a strong and visible ‘no’ to the despicable exploitation and violence of drug lords and merchants of death. We cannot overlook the evil of such violence.”

Parish priest at Bonnybrook, Fr Joe Jones, said he hoped that the new sacred space would encourage people back over this special Golden Jubilee year for the Bonnybrook parish and in particular to see the altar and ambo used by Pope Francis.

Mr O’Hagan said that the commissioning of the furniture was “without doubt” the most important project of his life. Everything was to be quite simple, he said. “It is all straight lines and a simple manufacture. There is nothing elaborate about the whole thing. The Pope is a simple man and he seems to live a very simple life, so the furniture is simple as well.”