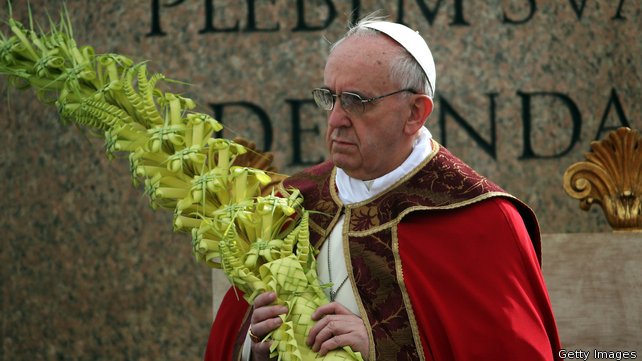 Over 100,000 pilgrims attended Palm Sunday Mass in St Peter’s Square yesterday and listened as Pope Francis posed the question ‘Who am I?’ in relation to the narrative of Christ’s Passion and death.

To a sea of people bearing palms and olive branches, the Pope said that while this week begins with a festive procession of welcome and praise of Jesus, it also recalls the mystery of the Lord’s death and resurrection of Holy Week.

During this Easter week, he said, “We would do well to ask just one question: Who am I, before my Lord? Who am I, who enters into Jerusalem in celebration? Am I able to express my joy, to praise Him? Or do I keep distant? Who am I, before Jesus who suffers?”

The Holy Father recalled the names of those appearing in Sunday’s Gospel reading which recounts Christ’s Passion and Death.

“Is my life asleep,” he asked, like that of the disciples who slept while the Lord suffered? “Am I like Judas, who pretended to love, and kissed the Master to give him over, to betray him? Am I a traitor?”

Departing from his scripted text, he asked the faithful to consider whether they were like Pilate? “When I see that the situation is difficult, do I wash my hands and not know how to accept my responsibility and let people be condemned, or condemn them myself?”

“Am I like that crowd that did not know whether it was in a religious meeting, a trial or a circus, and chooses Barabbas? For them it was the same: it was more entertaining to humiliate Jesus.”

“Am I like the soldiers who strike the Lord, spit upon him, insult him, have fun humiliating him?”

“Am I like the Cyrenian who was returning from work, tired, but who had the good will to help the Lord carry the cross?”

“Am I like Joseph, the hidden disciple, who carried Jesus’ body with love, to put him in the tomb?”

“Am I like the 2 Marys who remain at the tomb crying, praying?”

“Am I like those leaders who on the following day went to Pilate to say: “Look, he said that he would be raised. Make sure that more deception does not happen!” and hold back life, block the tomb to defend doctrine, so that life does not come out?”

“Where is my heart? Which of these people am I like? May this question accompany us this whole week.”

At the end of the Palm Sunday ceremonies and ahead of his recitation of the Angelus, the Pope offered special greeting to the 250 delegates – bishops, priests, religious and laypeople – who were in Rome to participate in a meeting organised by the Pontifical Council for the Laity for World Youth Day.

He noted that preparations were getting underway for the next gathering, which will take place in June 2016 in Krakow and will have as its theme “Blessed are the merciful, for they will find mercy” (Matthew 5:7).

Pope Francis recalled that thirty years ago Blessed John Paul II handed over the cross to young people. He asked them to carry it throughout the world as a sign of Christ’s love for humanity.

“On April 27 we will all have the joy of celebrating the canonisation of this Pope together with John XXIII. John Paul II, he started the World Youth Days, will become their great patron saint. In the communion of saints he will continue to be a father and friend to the young people of the world,” Pope Francis said.

He concluded, “Let us ask the Lord that the Cross, together with the image of Mary ‘Salus Populi Romani’ be a sign of hope for all, revealing to the world the unconquerable love of Christ.”

The Pontiff also expressed joy that on 15 August he will meet with the young people of Asia in Daejeon in South Korea during their great continental gathering.

Separately, Archbishop Diarmuid Martin of Dublin said in his Palm Sunday homily that there are many in society who “speak loudly about the failings of the Church – and that is necessary – but who fail themselves to allow the Jesus of the Gospel to embrace them and change them.”

He continued, “There are many in the fold of the Church, today as then, who know all the right language but allow their fears and their self-centeredness and their prejudices and their comfort zones to block them from taking the radical leap of real faith in Jesus.”

Once again the Archbishop reiterated that the Church is a community which reaches out and must never be closed-in on itself or self-centred.

The Church reaches out not to sell itself or to want to take up a place of power and prestige in society.  Its only mission is to preach and to witness to Jesus himself.

“The Church reaches out not in order to dominate but to bring freedom and redemption from the things that bear down on us and bear down on those in our world who are exploited and marginalised, who are victims of a culture of greed, who are burdened by scruples which our false ideas of God have imposed on them,” he said.