Palliative care not euthanasia is the answer: Cardinal Eijk 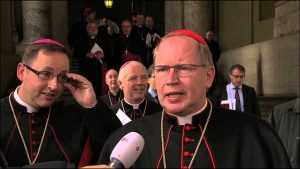 A top Dutch Church leader, who is in Ireland to give two addresses in the Diocese of Waterford & Lismore this week, has described palliative care as “a complete kind of care” which builds up communities.

Speaking to WLRfm radio on Monday, Cardinal Willem Eijk of Utrecht, who is a former medical doctor and a member of the Pontifical Academy for Life, told the Deise programme that he would tell someone who wanted to die by euthanasia that they should “try to find a good centre for palliative care which can offer professional and caring pastoral care” because “good palliative care can do a lot for people nowadays”.

The theologian, who has expertise in bioethics, underlined that palliative care is a complete kind of care because it is directed to the whole person.

“It is medical – we have a lot of possibilities now to treat pain in a very strong way but it can also offer psychological help, social help, spiritual help and pastoral help, so that we can help the person as a whole.”

The Cardinal, who has been archbishop of Utrecht since 2007 and is currently president of the bishops’ conference of the Netherlands said many palliative centres build up communities of professional people from medical staff to volunteers to family members so that patients are surrounded by a community that is very helpful in enabling them bear their suffering.

“As a catholic priest I would always recommend to people to unite themselves with Christ in their suffering. And the Lord will give you the strength to bear your suffering but you need the help of other people as well,” he said.

Cardinal Eijk was one of eleven cardinals who in 2015 took a stance though a collection of essays against Pope Francis’ apostolic exhortation ‘Amoris Laetitia’ and he is firmly opposed to communion for the divorced and remarried.

He warned that when a person is given a terminal diagnosis they are overwhelmed by emotions and by fear of what is to come.

“Many people fear social suffering because most people who are suffering in an incurable way lose their friends as people do not visit them any more. That is the most severe thing for them.”

He said one of his recommendations was not to leave people on their own to deal with their terminal illness.

He also questioned whether a person who has received a terminal diagnosis is really in a position to make a balanced decision on euthanasia.

“The basic question is do we have the right to dispose of our lives and the answer to that depends on a person’s view of man.”

“Many people now view man as the conscience – those functions in the upper brain that allow thinking, freewill and human social relationships; they see the body as something secondary which we share with all the other animals – it does not distinguish us as human beings. Many people view themselves as human persons as their conscience – their higher brain functions – that could determine the value of the life of their bodies and (they believe it) gives them the right to dispose of their body or their life.”

However, as Christians, he stressed, “We believe that the body is an essential part of us as human persons. We are, as the second Vatican council says, soul and body at the same time.”

Cardinal Eijk said the body shares and participates in the essential dignity of the human person, “so you may not sacrifice your body – your human life – in order to end suffering,” he warned.