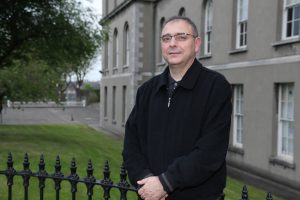 A leading Anglican cleric from the Diocese of Jerusalem has appealed to people in Ireland and Britain to support those working for peace in the Holy Land.

Canon Hatem Shehadeh was in Dublin last week to visit the Church of Ireland Diocese of Dublin and Glendalough.

Speaking to CatholicIreland.net after the ecumenical ‘Thinking Allowed’ discussion at Clonliffe College, the married father of three appealed to those who want to get involved in peace efforts to be neutral and set aside their pro-Palestinian or pro-Israeli stances.

“When I say ‘be pro-peace’, I mean, those who want to intervene in this conflict must be neutral and must see the suffering of both sides and the fear of both sides.”

Acknowledging that there are “two different narratives and two different sufferings”, the 57-year-old stressed that for 70 years, efforts to bring the two sides together hadn’t worked.

“We are not getting anywhere,” he stated as he urged people to support peace-focused initiatives and to remain neutral.

“Jesus said blessed are the peace-makers; peace doesn’t come in email or as a gift. You make it and you work hard for it. To Westerners I would say ‘be pro a just peace that will do justice on both sides’.”

He said his ministry and that of the Diocese of Jerusalem makes itself felt through institutions like hospitals, clinics and schools which serve the community.

“This part of the world has always witnessed violence but we have learned to overcome that through dialogue and through focusing on peace. We have no other choice but to find the right path and the right path is the way of peace.”

Though a Palestinian Christian, he was born in the state of Israel and Canon Shehadeh continues to live there. “I have Israeli citizenship and I exercise my religious worship freely – it is different from being a Palestinian in the West Bank. I present the story of a Christian Arab Israeli person who lives in Israel proper.”

Speaking to members of the Church of Ireland in Glendalough, Canon Hatem urged those present to pray for the Christian Arab community. He also encouraged people who travel to the Land of the Holy One to visit the Living Stones as well as the old stones.

“Millions of tourists come to Israel to visit the holy sites without recognising that there is a living community of Christ – the Living Stones. It is so important that you visit us. This is very important to us to know that we are not forgotten and that someone cares for us. You are feeding us by your presence and we feel that we are not alone,” Canon Hatem explained saying that people can ask their tour guides to bring them to worship in a local church.

There are 120,000 Christians living in Israel, Canon Hatem said. In Gaza there are 1,020 Christians and just one Anglican. The Al Ahli Arab Hospital is run by the Diocese of Jerusalem.

Canon Hatem Shehadeh also warned that if emigration of Christians in the Holy Land continues at current levels most churches will be museums within two decades.

He said the Diocese of Jerusalem, though “tiny in terms of numbers” covers Lebanon, Jordan, part of Syria, Israel and Palestine, and is doing its best “to encourage our people to stay and be strong in their faith, to be hopeful and to work for peace, which will put an end to emigration.”

The father of three said the role of the Christian Churches in the Holy Land is “to build bridges of peace and reconciliation between Arabs and Jews and between Israelis and Palestinians.”

“My role is to pray for them and convince the government of Israel to bring about peace with the Palestinians through a two-state solution.”

He was ordained by Bishop Samir Hanna Kafity, Primate of Jerusalem, in 1986 in Haifa, which is north of Galilee.

“My wife Elizabeth is originally from Nazareth, and her mother is from Northern Ireland from Maguiresbridge near Enniskillen.”

The couple have three children, Fadi, his eldest son is married; Catherine is just finished her Masters at Tel Aviv University; and Basil his youngest child is studying in Germany for a degree in languages.