Oxfam is encouraging people to abandon the throwaway society by pledging to stop buying new clothes for 30 days and to buy second hand during September.

“We are asking people to join us on a journey to a more sustainable lifestyle, starting with the clothes we wear,” said Michael McIlwaine, Head of Retail, Oxfam Ireland.

“Cheap production and plummeting prices when it comes to clothes means the items we buy often have a shorter lifespan, with more and more ending up in landfill before they should. In Ireland, 225 tonnes of textile are dumped every year. In the UK, 11 million items of clothing are thrown away every week. Throwaway fashion is putting increasing pressure on our planet and its people – and it’s not sustainable,” said Michael McIlwaine.

So Oxfam has launched Second Hand September based on research which shows that 63 per cent of Irish people see their local charity shop as playing a key role in sustainable fashion. 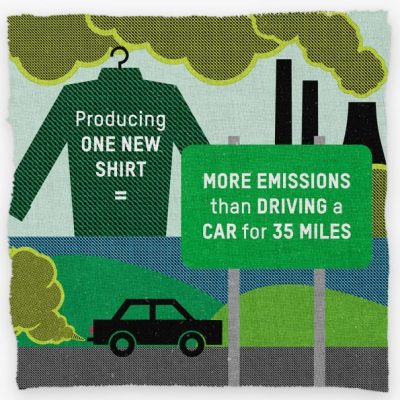 It also revealed that a majority of people (76 per cent) donate unwanted items to charity shops because it reduces the amount of clothes being thrown away.

The research also found that 62 per cent buy pre-loved clothes and accessories because it gives items a second chance to be worn and enjoyed.

“Our shops are part of the solution by offering people a way to reduce the amount of items they’re sending to landfill through donating as well as a way to reuse by shopping second hand and giving clothes, accessories and more a new lease of life,” said Michael McIlwaine.

By donating to and shopping in Oxfam stores people also help to raise vital funds for Oxfam projects which help people living in poverty worldwide, including those affected by climate change.

Oxfam works across many areas of fashion and collaborates with big brands to recycle and reuse stock. It has also joined forces with fashion houses to improve conditions for workers such as those who sew garments.

Oxfam has 47 shops across the island of Ireland, selling pre-loved clothes, accessories, handbags, shoes and more.

For further info and to take the pledge, visit: www.oxfamireland.org/shs.