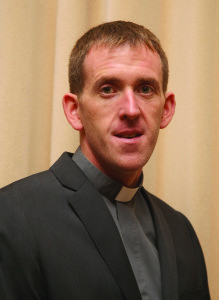 The Bishop of Ossory Dr Séamus Freeman SAC has appointed diocesan priest and theologian Rev Dr Dermot Ryan to the role of Communications officer for the diocese.

A native of Kilkenny, Fr Ryan studied for priesthood in St Patrick’s College, Carlow and was ordained in 2001.

He served as a curate in the parish of Ferrybank.

In 2004, he began his post graduate studies in the Gregorian University in Rome, where he obtained a doctorate in dogmatic theology in 2009.

On his return to the Diocese of Ossory, Fr Ryan served as a curate in the parishes of Mooncoin and Thomastown.

In 2010, he was appointed diocesan director of adult faith development and also chaplain to the diocesan college, St Kieran’s in Kilkenny. He later was made President of the famous Ossory school in succession to Mgr Kieran Kennedy in 2013. St Kieran’s College is the country’s oldest Catholic school.

Fr Ryan continues in his role as director of Adult Faith Development and is chairperson of the Ossory Council of Priests.

Among his publications are ‘Method to Mission: The Ecclesial Vocation of the Theologian as exemplified in the works of Francis A. Sullivan S.J.’ (Rome: Gregorian & Biblical Press, 2010).

Speaking about the appointment Bishop Freeman said, “I thank Fr Ryan for agreeing to take on this important ministry in our diocese and I wish him every blessing of the good Lord in his service.”

“I take this opportunity to thank the Very Rev Daniel Carroll from Loughboy, who served our diocese for many years as diocesan communications officer. Fr Carroll’s contribution and dedication to this ministry during his service is much appreciated by all.”