New documentary tells a story which rarely reaches the media or the public. 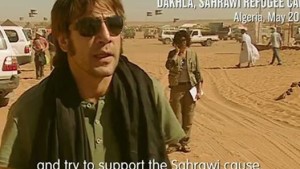 Oscar-winning actor Javier Bardem and director Alvaro Longoria were in the UK this week to promote their new documentary ‘Sons of the Clouds – The Last Colony’.

Using rare historic footage, and contemporary interviews, the film tells the story of the Western Sahara, once a Spanish colony on the Atlantic coast of north Africa, which was invaded by neighbouring Morocco in 1975.

As the Spanish authorities left, the Moroccan armed forces came in with tanks and used cluster bombs on the civilian population, driving more than 200,000 people into the Algerian Sahara Desert, where they have lived in tented refugee camps ever since.

Unusually, the UN peacekeeping mission in the region, do not have a mandate to record or monitor human rights abuses, and these are taking place with impunity. Many men and women have been tortured or ‘disappeared’.

A referendum on independence, that was supposed to have taken place in 1991, to determine the future of the Western Sahara, has been delayed by Morocco, year after year.

The story rarely reaches the media, as journalists and film makers are officially banned from visiting. A delegation of British MPs this year were refused entry to the occupied territory.

Alvaro Longoria told Independent Catholic News in London, “We take an indepth look at one of the forgotten conflicts of Africa, the destiny of its last colony. The problems and situations present in Western Sahara are the same in all Arab nations where democracy and human rights are not respected.”

“Our goal is to educate the audience by taking them on the journey as we experienced it. We learnt about the injustice , we met with the people and we resolved to understand how and why this could happen in spite of an International Court ruling and peacekeeping missions from the United Nations.”

“This film intends to be a call for ALL citizens to remember that it is our duty as well as our right, to remind governments that they must above all respect and protect human rights both at home and abroad.”

Javier Bardem,  seen recently in the James Bond film ‘Skyfall’, has won numerous awards including an Oscar for his role in ‘No Country for Old Men’.

He decided to make the documentary after attending a film festival in the refugee camps in 2008.

“I knew about the situation, but you don’t realise the full impact of something until you experience it personally,” he said.

This week Bardem has held meetings with the British Foreign Office. He has already addressed the US Congress and the United Nations.

“As a Spaniard I feel very responsible for these people and I think we should all feel ashamed of what we created there; and that such a situation has gone on for so long,” he said.

Bardem is asking for a referendum to take place and for the UN mission to add a human rights component to their mandate in the territory.

With original music by Fernando Velasquez, ‘Sons of the Clouds – The Last Colony’ is beautifully filmed and visually very striking. The film  won this year’s Goya Award for Best Documentary. It is available on ITunes, Amazon and Netflicks.