The Russian leader was at the midnight service in the Face of Christ the Savior Church in the Russian city of Sochi, close to the venue for the Winter Olympics, which has been in the news of late.

The President also sent a telegram for Christmas to His Holiness, Patriarch Kirill of Moscow and all Russia, stating that the Russian Orthodox Church and other Christian faiths of Russia “constructively participate in the life of the country and society, promote decent upbringing of the younger generation, support of family, maternity and childhood..”

The Russian President, who attends church at Christmas every year, also stated, “This radiant holiday nourishes the best feelings and thoughts, serves for the unity of millions of people on the basis of common spiritual values and historical traditions, the integral part of which is mutual respect and harmony, compassion and concern for one’s neighbour.”

Russian Orthodox believers celebrate Christmas according to the Julian Calendar on 7th January because the Church did not change to the Gregorian Calendar, which was adopted by other Churches from 1582.

In Ireland, there are now several Orthodox parishes. One Russian Orthodox church is situated in the Co Laois village of Stradbally in the vicinity of Stradbally Hall and estate which hosts the Electric Picnic every year.

Adrian Cosby, whose family have lived at the hall for hundreds of years, was instrumental in setting up the Orthodox church in Stradbally.

He told CatholicIreland.net that the Christmas service began before midnight on Monday and went on into the small hours of Tuesday (7th January) and was followed by food. 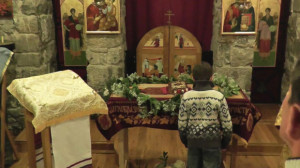 Celebrations continue on Sunday (12th) with a special party for the children.

There were around 40 people at the Christmas service, although there can be up to 300 people at the Easter services of the church which is named St Colman of Oughaval.

People travel from the surrounding towns and counties for services.

“It is really becoming like a parish here as a lot have been here for 20 years and their children have grown up here,” he told CatholicIreland.net.

Many of those involved in the church arrived in Ireland from Estonia, Latvia, Lithuania when those countries gained independence from Russia.

When he got involved in 1993, there were around 250 people belonging to the Orthodox Church in Ireland and this has since grown to 45,000 according to the 2011 census.