Home > News > Former leader of Opus Dei to be beatified

Former leader of Opus Dei to be beatified

The community of Opus Dei in Ireland has warmly welcomed the news that the successor of Josemaría Escrivá,  is to be beatified in September 2014.

The announcement came from the Vatican earlier this week following Pope Francis’s approval of the required miracle and the formal decree of the Congregation for the Causes of the Saints.

Alvaro del Portillo will be beatified in Madrid, the city where he was born and grew up, on 27 September 2014.

Speaking to CatholicIreland.net, Paul Harman from Opus Dei said that he expected hundreds of Irish members and friends to travel to the Beatification ceremony in Madrid, especially as Bishop del Portillo had such a link with Ireland, travelling here many times between the late 1950s and the 1980s. Mr Harman met him on several occasions.

“He was an extraordinary person, always smiling and very positive. He had a supernatural outlook on things and a serene temperament. You always got the impression when you were with him that he was keeping in touch with the Lord all the time.” 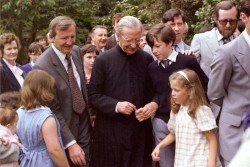 He was one of St Josemaría Escrivá’s closest collaborators, and succeeded him as Prelate of Opus Dei in 1982, serving in that role until his death in 1994.

The miracle which opened the way to his beatification involved a newborn baby, Jose Ignacio Ureta Wilson, who made a full recovery after a cardiac arrest lasting longer than half an hour.

In a Youtube video, his doctor tells how he had told the parents that the medics had done everything they could do and they expected the child to die.

Jose Ignacio’s grandmother suggested to the family that they ask Alvaro del Portillo to intercede for them.

“I didn’t know him very well, said Susana the child’s mother “but we started to pray.” At a certain point the heart beat, which was growing weaker, stopped. The whole family was praying with Alvaro’s prayer card. Then unexpectedly the heart started to beat again, getting stronger and stronger.

The baby’s doctor said that Jose Ignacio should have had “profound brain damage”, but instead, now aged almost eleven, he is a fine, bright and healthy boy. (The 8 minute video telling the story of the miracle is at: http://www.opusdei.ie/art.php?p=54200  (in Spanish with English subtitles).

Alvaro del Portillo’s beatification ceremony in Madrid will be presided over by the Prefect of the Congregation for the Causes of Saints, Cardinal Angelo Amato. 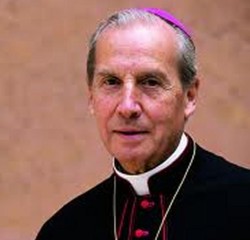 “In this moment of profound joy,” said Bishop Javier Echevarría, the current leader of Opus Dei, “I wish to thank Pope Francis for his decision to proceed with the beatification of this bishop who loved and served the Church so well.”

“From now on, let us entrust to the soon-to-be Blessed Alvaro the intentions of the Holy Father: the apostolic renewal and service to God of all Christians, the care and support of the needy, the upcoming synod on the family, and the holiness of priests.”

The central task of members of Opus Dei is to spread the idea that all men and women are called to the fullness of the Christian life, whatever their work or condition in the world might be.

Harambee Africa International, a charity born on the occasion of the canonisation of Josemaría Escrivá which promotes education initiatives in Africa, plans to organise activities in Madrid and Rome during the days of the beatifcaiton to raise funds for four projects in sub-Saharan Africa which were encouraged by Bishop Alvaro del Portillo during his years as Prelate of Opus Dei.

They are a mother-and-child centre linked with Niger Hospital in Enugu, Nigeria; three nursing centers at Monkole Hospital in Kinshasa, Congo; and a programme to fight child malnutrition at the Ilomba Rural Centre in Bingerville, Ivory Coast.

The fourth project aims to fund scholarships for African seminarians at the Pontifical University of the Holy Cross, founded in Rome by Bishop del Portillo.