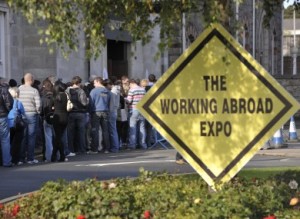 Young Irish emigrants are being asked to take part in a global online survey to assess how they are coping with having to start a new life away from home.

The survey, which has been described by organisers as “unique” aims to give an insight into the mental health of recent Irish emigrants.

It will be carried out by Crosscare’s Migrant Project, an NGO under the care of the Archdiocese of Dublin, which provides information and a support service for intending Irish emigrants and returning Irish emigrants.

The survey is funded by the Department of Foreign Affairs and Trade and is aimed at Irish people who have left Ireland since January 2009.

Over the last five years, approximately 200,000 Irish people have left the State.

This year will likely see the largest number of Irish people emigrate to Canada since the 1800s.

According to Crosscare’s Policy Officer, Joe O’Brien, “Leaving your home and your country and trying to start a new life in a whole different setting and part of world is one of the most challenging things that any person can undertake.”

“We want to find out more about the personal and emotional challenges that people face and struggle with and most importantly how they are coping.”

Joe O’Brien said emigration looks like it will be a feature of Irish life into the future.

“This survey is about finding out about the strength of our recent emigrants and the practical ways they have coped with the emotional upheavals involved – all with a view to better informing and preparing future emigrants.”

“We are hoping for input from Irish emigrants all over the world including those who have returned.”

The survey will be open until the end of May and is confidential survey.

“We will also be asking people their own view on how their mental health has changed before, during and after the process of emigrating,” Joe O’Brien added.

On the basis of the survey’s findings, Crosscare’s Migrant Project plans to produce an informed, ‘emigrant driven’ guide on how to cope with the emotional and mental challenges of emigration.

“It could be a small but important contribution to easing the strain of emigration for future emigrants,” Joe O’Brien said.

The survey can be found via www.migrantproject.ie and at http://www.surveymonkey.com/s/emigrantmentalhealth