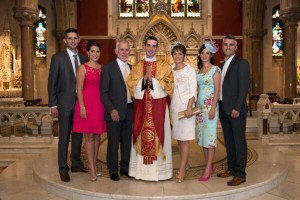 The first ordination in the Sacred Heart Church in Omagh in twenty-five years took place on Sunday.

Fr Brendan Collins from Clanabogan was ordained for the Diocese of Derry by retired Auxiliary Bishop of Derry, Dr Francis Lagan.

Fr Collins has been serving in St Eugene’s Cathedral in Derry since he was ordained a deacon in the Basilica of Santa Maria Sopra Minerva in Rome two years ago.

Last night, the newly-ordained priest celebrated his First Mass in the Sacred Heart Church in Omagh.

The twenty-nine-year-old priest studied Business and ICT at Omagh College and the University of Ulster. Prior to entering the priesthood, he worked in retail management.

He told the Ulster Herald that it was his “dream to be ordained in his parish.”

“Explaining why I want to be a priest is very difficult,” he said. “It is about witnessing to other people. Everyone and everything I encountered along the way has taken me to where I am today.”