Home > News > Elderly must be included in social housing: Alone 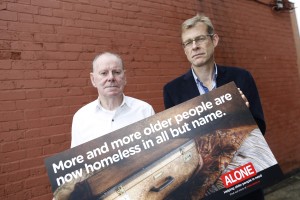 Pictured at the launch of the ALONE ‘homeless in all but name’ campaign were CEO of ALONE Sean Moynihan and ALONE resident Brendan. Photo: Jason Clarke

The Government has been asked to plan more effectively for the housing needs of Ireland’s ageing population by ALONE, the charity that provides services for older people in need.

Launching their ‘homeless in all but name’ campaign on Monday, ALONE warned of Ireland’s mounting crisis around housing the country’s elderly.

In its Annual Report, which was also released on Monday, ALONE reveals that over 50% of all calls received by it in 2014, were directly related to homelessness or housing.

Sean Moynihan, CEO of ALONE explained, “All of our services focus on supporting older people to age at home. However, in recent times, the number one issue that people have been presenting with is housing.”

He added, “Whether they are homeless, living in emergency accommodation, living in unsuitable or unsafe housing – housing is a critical issue for the people that we work with”.

According to Mr Moynihan, ALONE are asking the Government to plan effectively for the housing needs of our ageing population, as a nation.

“We need to do better by our older people. The private rental market is simply not suitable for older people as many will have support needs as they age. If the Government is serious about supporting older people to remain living in the community, we need to plan for suitable housing with supports.”

He said there should be a detailed housing strategy for the ageing population with the number social housing units ring-fenced, mirroring the population in each council area.

“A large portion of those coming to us for support having been living in the private rental market for many years and now their landlords are increasing the rent making them unable to afford their homes,” said Moynihan.

ALONE has found that most older people who have become homeless in the current market, have little or no chance of securing private rented accommodation. 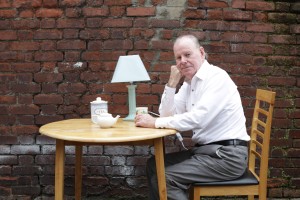 Factors that impede older people in finding accommodation include a lack of suitable accommodation for single people, inability to compete in the private rental market, the bias of landlords against older people and dramatic cuts in grants that allowed older people carry out essential maintenance work on their homes.

“We ask the Government to designate a portion of all social housing units for use by older people,” Sean Moynihan appealed.

The CEO of ALONE said a system that supports older people, and allows them to pay a fair rent for accommodation that is suitable to their needs is needed.

“We are failing any older person who is living in shared emergency accommodation, or who can only afford a third floor apartment despite their mobility difficulties. These are not isolated occurrences and we need to act now”.

To support the campaign, sign the online petition at: www.ipetitions.com/petition/alone-homeless-in-all-but-name

Established in 1977, ALONE is an independent charity that supports vulnerable older people to age at home.

The charity works with those who have issues with social isolation, lack of services, poor health, poverty, homelessness or housing.

ALONE receives no Government funding for its day-to-day activities so it relies solely on the generosity of the public to continue its work.